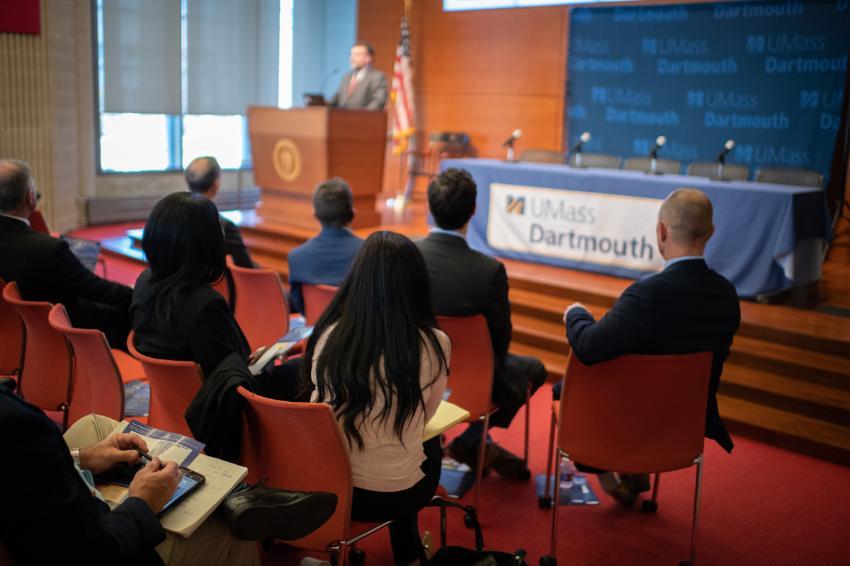 “Accelerating the Marine Science and Technology Corridor” along the SouthCoast of Massachusetts and throughout Cape Cod and Rhode Island was the focus as more than 150 leaders from industry, higher education, and government gathered at UMass Dartmouth today. The meeting, the activities leading up to it, and the next steps are being funded by a three-year $600,000 grant by the U.S. Economic Development Administration (EDA).

Today’s event, which marked the end of Year 1 of the EDA grant, featured the release of a UMass Dartmouth Public Policy Center study entitled, “Charting the Course: A Regional Assessment of the Marine Science and Technology Sector in Southeastern New England,” which will be used to develop a strategic plan to build the marine economy of the region.

“There is an ocean of opportunity calling for our leadership and partnership to chart the course forward, and I know that together, we can answer this call,” UMass Dartmouth Chancellor Robert E. Johnson said. “Thanks to the Economic Development Administration’s support, we now know the cornerstones necessary to grow a vibrant, job-creating marine economy in this region, and can develop a coherent, sustainable strategy built on our strengths.” The meeting featured remarks by Congressmen William Keating and Congressman Joseph Kennedy, an update on offshore wind development, a presentation on Portugal’s BlueTech Accelerator, and a panel discussion on undersea defense research.

“Southeastern Massachusetts has a long history as an ocean-based economy,” said Congressman Keating. “It’s fitting that our region with this vibrant history is now evolving into the nation’s leader in the blue economy sector. With the forecast predicting that over the next half century the blue economy will grow at twice the average rate as the rest of the economy, Southeastern Massachusetts has all the fundamentals in place to move forward with great success. Thank you to UMass Dartmouth for being a leader in our expansion of the blue economy in our region.”

“No region in this country is better prepared to build a Blue Economy than the South Coast of Massachusetts,” said Congressman Kennedy. “With pristine natural resources, world class academia and a relentless workforce, we stand on the frontlines of a clean energy future that can protect our environment, build our local economies and bring down energy costs for families and small businesses. Through the continued support of the EDA and the findings of this report, we will lift up this industry and the communities that rely on it.”

The Public Policy Center report analyzes the Marine Science and Technology (MST) sector in Southeastern New England (SENE), a region composed of Bristol, Plymouth, Barnstable, Dukes, and Nantucket counties in Massachusetts and all of Rhode Island. The sector consists of 115 companies and 21 public and nonprofit research organizations that are geographically distributed throughout the region, primarily along coastal waters. There are two areas of concentration, including one around southern Rhode Island where the Naval Underwater Warfare Center and Raytheon are located, and one around Falmouth, Massachusetts, where the Woods Hole Oceanographic Institution is located. Located at the center of the region is the 8,200-student main campus of UMass Dartmouth as well as the university’s School of Marine Science and Technology in New Bedford and Center for Innovation and Entrepreneurship in Fall River.

The full research report includes an assessment of research strengths and opportunities, a workforce analysis that identifies current and future high priority occupations, and an analysis of opportunity areas and challenges for the MST sector going forward. Ten clear implications for action emerged from the Public Policy Center’s analysis:

Following the symposium, guided by the findings of the Public Policy Center report, UMass Dartmouth in collaboration with the SouthCoast Development Partnership and the region’s planning agencies, will convene an industry Corridor Alliance to position the region as an international blue-tech cluster driven by collaboration, innovation, and education. The Corridor Alliance will develop a 10-year strategy for the marine science and tech corridor, including programmatic activities to brand the region, expand the workforce, and drive innovation.

The full Public Policy Center report can be found here.