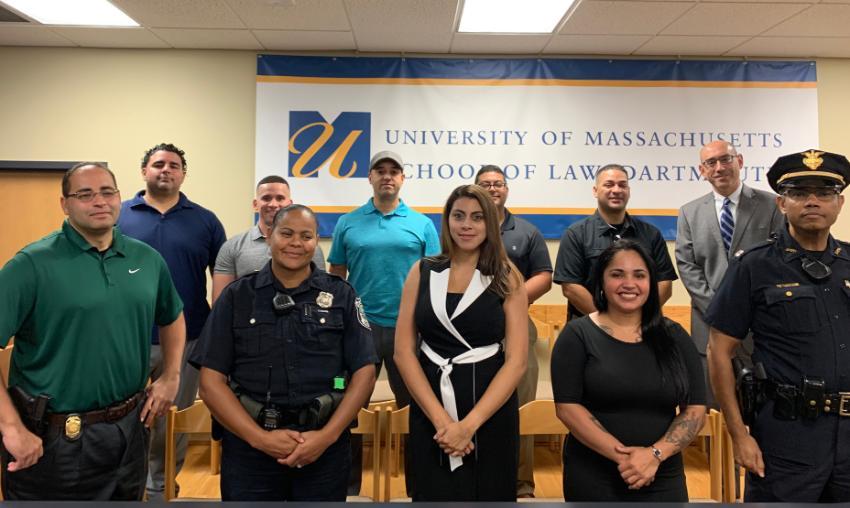 In an effort to give back to their community while creating career opportunities in the legal professions, Hispanic members of the New Bedford Police Department have begun a scholarship at UMass Law. On September 24, Banessa Gonzalez, a third-year UMass Law student, became the inaugural recipient of the Hispanic Police Officers of New Bedford Scholarship.

“Ever since I started working for the New Bedford Police Department, I have always wanted to find a way to give back to the Hispanic community. This summer, several Hispanic officers came together to fund a scholarship to support the next generation of local criminal justice professionals,” said Sergeant Samuel Ortega. “Collaborating with UMass Law was an easy decision - the law school is local, affordable, and has earned a competitive reputation in the state.”

“Words cannot express how grateful I am that the police department of New Bedford came together to support the hopes and dreams of a law student like myself,” said scholarship recipient Banessa Gonzalez. “It was truly an unexpected gift and I’m very thankful for everyone who contributed in order to make my dream of becoming an attorney a reality.”

The scholarship looks to affect students both financially and professionally by offering mentoring and networking opportunities throughout the many agencies that make up the criminal justice system. More than fifteen Hispanic police officers are contributing to the five-year fund that gives first preference to a Hispanic resident of Bristol County with demonstrated financial need.

“UMass Law is thrilled to see members of our local community come together to expand opportunities for our law students,” said Dean of UMass Law Eric Mitnick. “At its core, this type of community-sourced scholarship is a true fulfillment of our mission to educate service-minded students who will in turn pursue justice within their communities.”

UMass Law is one of only eight law schools in the country to experience a year over year increase in applications exceeding 20%. At the start of the 2019 academic year, UMass Law welcomed 113 new students, a 21.5 percent increase over the previous year, and a 71% increase since the Commonwealth’s only public law school received full ABA accreditation three years ago. The incoming class is among the most diverse in New England, and the most academically well qualified in the School’s history.