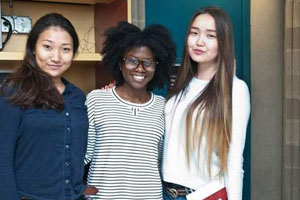 ‌Photos of students at work and at play. Sincere smiles and some clowning around. Heartfelt reflections and whimsical advice. Friends found, tests taken, achievements accomplished.

That's Humans of UMass Dartmouth, a Facebook page begun by Maria Amell '16 in May 2013 to tell stories through photography and brief profiles.

Almost two years later, the project continues to celebrate the spirit of UMass Dartmouth, in all its diversity.

"The sole purpose was to show the world what UMass Dartmouth has to offer," Maria said.

A graphic design major from Plymouth, Maria said that the project was intially going to last two weeks.

"The page has more than 1,200 followers and has been featured in our student newspaper, The Torch, and in marketing materials." The project was also profiled in a recent news story on SouthCoastToday.com.

"It's amazing to see the community spirit the site has created," Maria said. "I was fueled by passion from the very beginning, and I think people responded to it. People were excited to be a part of something they strongly believed in."

On a personal note, Maria said, "I've built some lasting friendships and have learned to communicate with strangers."

One of Maria's favorite posts is by Aubrie Brault, who describes her initial reaction to the campus architecture. "After a while you learn to appreciate its complexity and beauty," Maria said.