Jillian Bolinger's research on supernovae earned her a spot at the 2014 "Posters on the Hill" event in Washington, D.C., sponsored by the Council on Undergraduate Research.

By Web Editor
Posted Friday, May 8, 2015
Updated: Thursday, March 31, 2016
Share on FacebookTWEETShare on LinkedInPRINT THIS PAGEEMAIL THIS PAGERSS 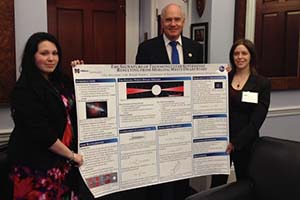 ‌Jillian Bolinger ’15, a physics major and math minor from New Bedford, has focused on astrophysics and the study of supernovae: exploding stars.

She was one of 60 U.S. students selected to present her work at the 2014 "Posters on the Hill" event in Washington, D.C., sponsored by the Council on Undergraduate Research. The Honors student presented her work on Capitol Hill and met with members of Congress and their staff members to emphasize the importance of undergraduate research.

Jill has also participated in a Massachusetts STEM Summit where she described her research on a panel with NASA astronaut Sunita Williams.

She plans to continue her studies toward a master's degree in physics at UMass Dartmouth.

The title of Jill's project was "The Signature of Thermonuclear Supernovae Resulting from Merging White Dwarf Stars." She has worked with Prof. Robert Fisher toward a prediction of an observable signature of a tremendously bright stellar explosion, known as a supernova. In her research, Jill studied a class of exploding stars known as thermonuclear supernovae.

As one of the brightest objects in the cosmos, a supernova can be seen clearly by astronomers, even if it is located in a vastly distant galaxy. As it ends its life in an unfathomably large explosion, a supernova releases as much energy over the span of several seconds as the sun does in its entire lifetime.

"Beyond being incredible explosions, supernovae provide a rare and fascinating opportunity for astronomers to understand these cosmological distance markers," said Jill. "In January, a supernova erupted close to 12 million light years away. It was one of the closest and brightest supernovae in recent history viewable from Earth. However, the stellar conditions of origin for this type of supernova remain a mystery."

From a fascination with space to a focus on astrophysics

Jill said that she has "always been fascinated with outer space."

"I was originally enrolled as an undeclared engineering major, but an introductory chemistry course helped me discover my passion for physics—and my path in physics toward astrophysics was obvious to me from there.

"Toward the end of my sophomore year, my intentions to get involved in research came up during a conversation with Dr. Fisher, and later that week he introduced me to his work. His investigations of the mysteries of a particular type of supernova captured my curiosity, and he has been my advisor ever since."

The importance of undergraduate research

Jill received a stipend from the Office of Undergraduate Research to pursue her research in thermonuclear supernovae.

"Becoming involved with undergraduate research has completely changed my experience as a student in very positive ways," Jill said. "The opportunities to connect socially, the new style of learning, and the environment to practice new skills that open-ended research has provided me are unmatched by anything I have ever done.

"The faculty members in the Physics Department have all been very supportive and each offers a unique skill set," she added. "Dr. Fisher has been a great advisor, maintaining a balance between when to guide me, and when to let me go on my own."

Following graduation, Jill will continue to pursue to her research interests in UMass Dartmouth's graduate program in physics.

Becoming involved with undergraduate research has completely changed my experience as a student in very positive ways.

Becoming involved with undergraduate research has completely changed my experience as a student in very positive ways.