X-ray diffractometer: device will advance research throughout the region

UMass Dartmouth's newly installed x-ray diffractometer is the only one of its kind in southeastern Massachusetts.

‌Researchers and students at UMass Dartmouth now have access to a state-of-the-art instrument that can map the structure of a chemical compound, in three dimensions, in the matter of a day or a few hours.

The newly installed dual-source, single crystal X-ray diffractometer is the only one of its kind in southeastern Massachusetts and will advance scientists' ability to analyze the structure of a substance, an important aspect of chemistry. The new machine can map a compound in a matter of a day or even hours.

Dr. David Manke, assistant professor of chemistry and director of the new Southcoast Single Crystal X-Ray Diffraction facility, said, "Our students benefit, because they will now gain exposure to X-ray diffraction on a cutting-edge instrument, in class and in research, helping prepare them for further education or their careers."

Housed in UMass Dartmouth's Research Building, the X-ray diffractometer is available to other institutions—including area community colleges—through on-site visits and remotely via webcams and other software.

A primary tool in characterizing chemicals

Manke said that "single crystal X-ray diffraction is one of the primary tools in characterizing chemicals that have been synthesized." 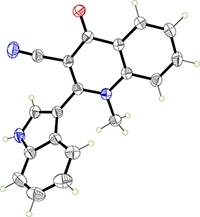 Single crystal diffraction data gives a picture of a molecule, showing the position of every atom, with the distances and angles between them—as illustrated in the image, at right, of an organic molecule synthesized in Prof. Sivappa Rasapalli's lab.

Manke added, "Single crystal X-ray diffraction couples with Nuclear Magnetic Resonance (NMR) to give a comprehensive understanding of what a chemical looks like in solution and in the solid state. UMass Dartmouth now has both technologies, having obtained an NMR spectrometer via an MRI [Major Research Instrument] grant two years ago from NSF."

"Understanding the structure of a molecule helps to explain how it functions in reactions or in biological systems," Manke said. His own research focuses on the synthesis of inorganic molecules and materials.

"The primary means of characterizing these materials is X-ray diffraction," he said. "Until we had the instrument on campus, we would ship samples to San Diego for characterization, which added a great deal of time and made it difficult to get characterization for air-sensitive or unstable compounds.

"For UMassD researchers, a critical technique is now readily available and should increase the rate and quality of data produced," Manke said.

The X-ray diffractometer lets researchers determine the structure of a chemical from the scattering pattern produced when a beam of X-ray radiation interacts with the material. By measuring the angles and intensities of these patterns, a researcher can produce a three-dimensional image of the density of electrons that make up the compound.

The new instrument will allow for the single crystal structure determination of stable and air-sensitive inorganic, organic, and organometallic compounds at various temperatures. The diffractometer is a dual-source instrument, meaning it has both a copper X-ray source, especially useful for studying organic chemicals and natural products, and a molybdenum X-ray source, suitable for examining inorganic chemicals and materials with heavy metals.

Our students benefit, because they will now gain exposure to X-ray diffraction on a cutting-edge instrument.

Our students benefit, because they will now gain exposure to X-ray diffraction on a cutting-edge instrument.