Jesse Waidler '16 focused his undergraduate studies on history and French before pursuing his master's in education. 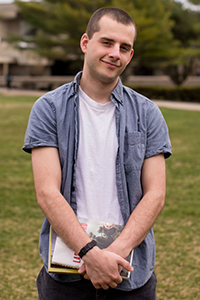 An E5 sergeant in the U.S. Army, Jesse Waidler ‘16 learned French at the Defense Language Institute and began working for the Department of Defense as a linguist, translating documents and aiding with interpretations.

After his deployment to Kosovo to work on an ongoing NATO mission, Jesse transferred to UMass Dartmouth and majored in history and French. He accelerated his studies by taking six classes a semester and finished the requirements for his undergraduate degrees in January.

“It can be tiring at times, but as long as you’re physically able, you can make anything happen,” Jesse said about his busy schedule. “You have to remember that you’re working toward your goal. And if you come up short, you’ll never be satisfied.”

Despite his busy schedule, Jesse read his poetry during the Foreign Language Department’s Art Nights and worked with Dartmouth Cable TV and the university to produce a documentary on Stage Coach Lines.

A transfer student, Jesse wanted to pursue degrees in history, French, and education at a state university. "I transferred to UMass Dartmouth because of the programs the university offers," he said. "It was the best fit for me to accomplish my goals."

Jesse decided to study history because it's the "foundation of humanity" and credits his history classes for opening his mind and allowing him to appreciate where he travels.

"Visiting and living in different countries, I realized that through understanding history, barriers and boundaries begin to disappear, and we can begin to understand how every culture has developed.

I transferred to UMass Dartmouth because of the programs the university offers. It was the best fit for me to accomplish my goals. Goal of becoming a university professor

After graduating with his undergraduate degrees, Jesse enrolled in the Master of Arts in Teaching program at UMassD and pursued his career with the army.

"Thanks to my degrees and prior skills, I acquired a full-time position as an analyst," he said.

Once he graduates from the education program, Jesse plans to begin doctoral studies on the Balkans. He hopes to become a university professor.

Tricia Breton and Marissa Matton contributed to this spotlight.

I transferred to UMass Dartmouth because of the programs the university offers. It was the best fit for me to accomplish my goals.

French is a language rich in literary and cultural traditions. An official language in 29 countries, for all United Nations agencies, and for the European Union, French remains one of the top three most useful languages for business.

As a French major at UMass Dartmouth, you'll study the culture, language, and literature of the French-speaking world. You'll develop proficiency in speaking, listening, reading, writing, and cross-cultural communication as you explore topics in areas such as linguistics, civilization, film, cultural diversity, equality, political rights, social justice, and the entertainment industry.