Visiting a trio of historical sites elevates students' understanding of culturalism and the meaning of activism. 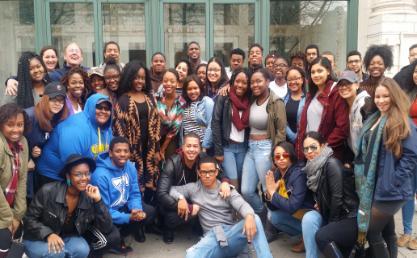 UmassD students recently engaged in an educational trip centered on the topics of social justice and culturalism. The trip was sponsored by the Black History 4 Seasons (BH4S) Council and organized/co-coordinated by BH4S student committee members Rachelle Edouarzin and Charlemya Erasme.

“The purpose of the trip was to expose students from all disciplines to various themes and ideas relating to social justice, and provide an interactive experience enabling students to discuss intercultural perspectives with regard to historical events and spaces,” says Lasella Hall, Associate Director of the Frederick Douglass Unity House. ‌

Day 1 of the journey

On Saturday, March 12, BH4S chaperones and 40 students boarded the Coach USA bus from UMassD to New York. Aboard the bus, the group viewed Academy-award-winning director Spike Lee’s acclaimed biopic Malcolm X followed by an engaging dialog about the era of the 1960s and the prominence of social justice activities initiated by the activist and other leaders in Harlem, New York.

Newark, New Jersey was the first stop after the four-hour journey eastward. From cultural cuisines to sightseeing activities, students were fully immersed in the dynamics of inter-culturalism.

Politics, art, music, and dance, including a mid-evening trip to the WOFABE African Dance and Drum Festival were also central to the experience. “The

WOFABE Company even personally acknowledged the students for venturing further east to engross themselves in the rich experience of documenting life through dance,” says Hall.

During an off-peak-time dinner, the students continued the discussion on the definition and meaning of blackness and how blackness parlays into other sectors of culturalism and ethnic identity – including the African, Afro-Cuban, Cape Verdean, Hispanic, and Latino experiences.

Day 2 of the journey

The following day, the group headed to the Shabazz Center in historic Harlem, New York where they engaged in an educational lesson by capturing imagery of the traditionally African American community lined with streets named in honor of legendary activists, educators, and entertainers spanning every genre of the arts. During their self-guided tour, they strolled along Malcolm X Boulevard, which then revived the discussion of Lee’s film as well as a lecture on the time period in which the Malcolm X gained notoriety for his politics, activism, and religiosity.

Exiting the city of Harlem by mid-morning and cruising through the streets of the Big Apple, the students soon arrived at Madam Tussaud’s Wax Museum in Manhattan where they identified various life-sized likenesses of

Making a positive impact on students

So, how did it feel to partake in a weekend-long historical lesson on African Americans in social justice?

“This trip was truly eye opening, presenting not only students, but faculty with a broad insight on the definition of social justice; social justice is multilayered. Overall, the Social Justice trip provided a platform for students to return with knowledge that can positively impact the UMassD community,” says Erasme.

“Many students had never been to New York,” says Hall. “So this trip allowed students to see aspects of the black experience in places outside of their neighborhoods and four corners of the Earth.”

In fact during the trip, Janet Lopes, social justice major and President of the Cape Verdean Student Association, commented, “As a child, I remember watching these places on TV and telling my mom I wanted to go to those places and do those things. And now here I am.”

“I believe that we fulfilled the purpose of the Social Justice Trip, which was to expose students to different aspects of modern and global perspectives,” says Edouarzin. “By the end of this trip, students were loaded with a series of questions regarding Afrocentrism, ethnic identity, and leaders of the Civil Rights Movement.”

The coordinators of the Social Justice Trip would like to personally thank the following sponsors who supported this educational initiative:

The purpose of the trip was to expose students from all disciplines to various themes and ideas relating to social justice, and provide an interactive experience enabling students to discuss intercultural perspectives with regard to historical events and spaces.”

The purpose of the trip was to expose students from all disciplines to various themes and ideas relating to social justice, and provide an interactive experience enabling students to discuss intercultural perspectives with regard to historical events and spaces.”