Noticing that many veterans had "fallen through the cracks," Ryan Arsenault JD '16 attended law school with the goal of practicing veterans law.

The potential of UMass Law

I chose UMass Law because it was the first public law school in the state, and I was interested in pursuing an affordable education. At the time I applied, it was a big gamble to choose UMass Law, because it wasn’t established yet, but it only took one visit for me to see the potential the school had. I was sold pretty early on.

From military service to a commitment to veterans law

My education has been anything but ordinary.

I enlisted in the Marine Corp Reserves while going to Worcester State full-time. In 2005, while in my second year of college, I was pulled from school and deployed to Fallujah, Iraq. I returned in the spring semester of 2007 and went to school year-round to finish my degree in December, 2008.  I decided to take a year to study for the LSAT and apply for law school. I was admitted to the first UMass Law class in 2010.

However, I was recalled to the Marines and deployed to Afghanistan in April, 2011. Upon returning from Afghanistan, I took a position with the Boston Fire Department as a Fire Fighter EMT. During my time in this position, I began to see that a large population of the people I was treating were actually veterans. Those veterans had clearly fallen through the cracks of the Veterans Affairs (VA) system and were left to fend for themselves. It was with this notion that I chose to return to law school with the hopes of practicing veterans law.

I created an independent study and research project with the Community Development Clinic Coordinator to determine what is necessary to create and sustain a veterans legal clinic in the Commonwealth of Massachusetts. 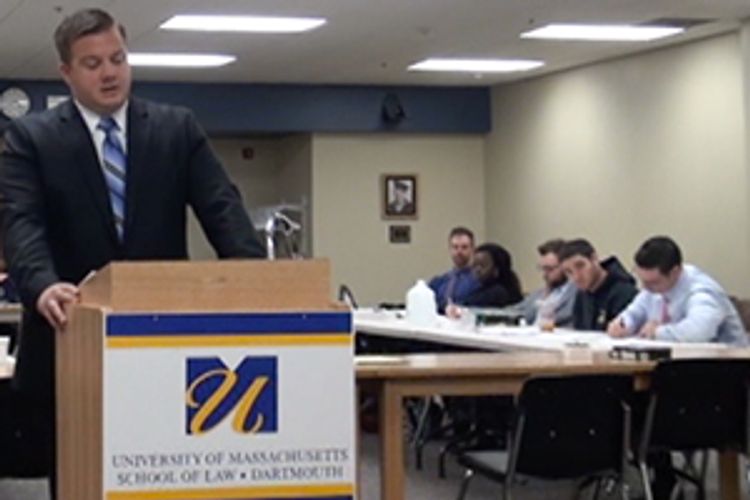 As part of his practical experience, Ryan had the opportunity to participate in a series of mock trials on campus.

During the summer of 2015, I worked for a criminal defense firm in Boston, where I was 3:03 [student practitioner] certified. It was a great experience taking court-appointed cases and providing legal services to indigent clients.

However, the most significant breakthrough for me was while working for UMass Law's Community Development Clinic. I was charged with helping a corporation in the community to restructure their bylaws and articles of incorporation. It was while doing this work that my idea to create my own veterans' legal clinic was hatched. With this idea, I created an independent study and research project with the Community Development Clinic Coordinator to determine what is necessary to create and sustain a veterans legal clinic in the Commonwealth of Massachusetts.

Upon graduation I will sit for the Massachusetts Bar. Once I pass the Bar, I plan on becoming a VA-certified attorney, with a practice area of assisting veterans obtain VA healthcare and disability benefits.

I created an independent study and research project with the Community Development Clinic Coordinator to determine what is necessary to create and sustain a veterans legal clinic in the Commonwealth of Massachusetts.