Playing with your mind and your heart in the fast-evolving field of visual effects. 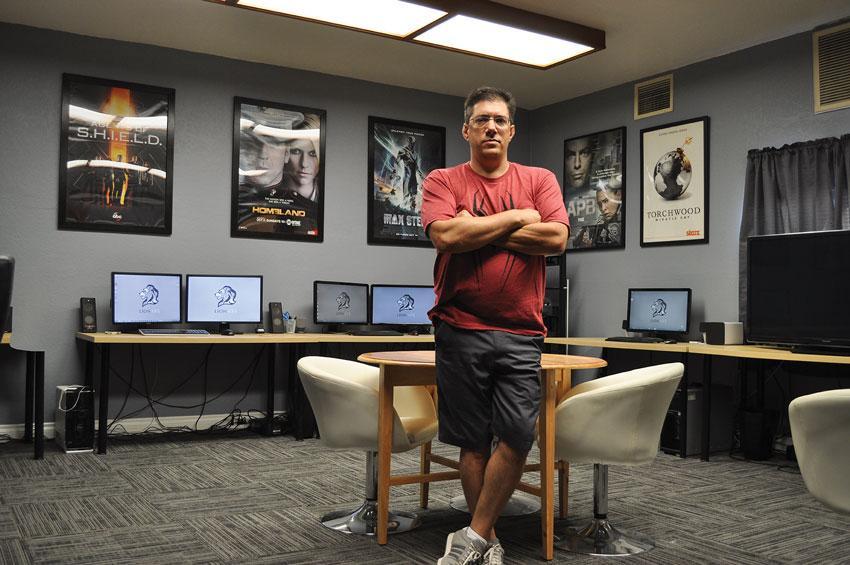 Michael Leone ’94 has achieved his dream of working in the VFX industry.

If you caught FOX's premiere season of the high-tech cop show, APB, chances are your adrenaline rushed. Maybe you thrilled as drones tracked down the bad guys. Or you felt empathy for the police dog walking with a prosthetic leg.

That is how Michael Leone '94 plays with your mind and your heart in the fast-evolving field of visual effects.

As the VFX supervisor for APB, he's on the set from dusk to dawn guiding directors, cameramen, and producers. As VFX producer, he manages multiple visual effects vendors and also uses the latest computer technology himself to create virtual car crashes, to darken skies for a sense of foreboding, to make a physical set look bigger with virtual elements—and even to travel inside a wristwatch.

His dazzling mélange of effects, including explosion enhancements and computer-generated (CG) face replacement is on display in 30+ TV shows and movies, including Homeland, Marvel's Most Wanted, Max Steel and The Wind in the Willows.

"It's about figuring out the pieces of the puzzle so every shot looks great and everyone's happy at the end," he said.

Leone's interest in special effects started as a child growing up in Framingham. He was fascinated with sci-fi films such as Star Wars and action heroes like Indiana Jones. By his senior year at Framingham North High School, he knew he wanted to pursue computer graphics, and the box-office smash hit, Jurassic Park, inspired him to follow his dream of working in the VFX industry.

"It was all those larger-than-life creatures in a world that looked so believable," said Leone, whose work has earned him an Emmy nomination.

Gaining the inside track

He enrolled in UMass Dartmouth's College of Visual & Performing Arts (CVPA), where he earned his BFA in electronic imaging and illustration. Animation Career Review ranks CVPA as first in Massachusetts, second in New England, and 40th in the country among public schools and colleges that offer animation programs.

"UMassD set up my whole life," he said. "I credit Professors Harvey Goldman and the late Robert Barry, who gave me the tools of the trade using the latest computer-animation program."

He saw his future really take shape at a career day in his junior year, where industry professionals discussed the fast-growing job market.

After graduation, Leone joined Viewpoint Studios, a broadcast design and animation company in Boston, working as an artist on projects for ESPN and the Discovery Channel. In the summer of 2002, Hollywood beckoned. "I got a call on a Monday, left for LA on Wednesday, and started working on Thursday," he said.

He landed a position at Radium as a VFX artist on network television programs such as Buffy the Vampire Slayer and Angel, and eventually moved to Zoic Studios where he worked his way up to VFX supervisor.

But his ultimate goal was to start a boutique-sized company with a few fellow visionaries to work on high-profile projects. In 2008, he launched LION VFX, and immediately got work on Criminal Minds, Dollhouse, Gossip Girl, and Torchwood. The firm has gained clients such as Disney, Showtime, and Sony, and recently opened a second office in Massachusetts.

I credit Professors Harvey Goldman and the late Robert Barry, who gave me the tools of the trade using the latest computer-animation program.

Visual effects appeared in Dollhouse on the Fox network.

To create a post-apocalyptic street scene for an episode of Dollhouse, a science-fiction series that aired on FOX in 2009 and 2010, the show's production crew produced a corner block of devastation on the FOX Studios backlot. The physical set included pit fires, debris, broken windows, and burned vehicles.

"We [then] created a CG city environment consistent with the practical set, including buildings, streets, trash barrels, vehicles, lamp posts, fire pits, dirt, debris, and smoke," he said. The CG elements were then textured, lit, and 3D-tracked into place— achieving the goal of disguising the point at which the practical set ends and the imaginary set begins.

"There are moments in everyone's career when they feel like they've achieved success," he said.

"For me that was moving from Boston to LA, working on Buffy the Vampire Slayer, and seeing my shots on TV for the first time. My work was being broadcast to millions of people, and my name was in the credits as the supervisor responsible for the body of work. It's all those milestones you hoped you'd hit, and you do hit."

I credit Professors Harvey Goldman and the late Robert Barry, who gave me the tools of the trade using the latest computer-animation program.