Opportunities to present her research at national conferences

By College of Arts and Sciences
Posted Tuesday, October 22, 2019
Updated: Saturday, February 22, 2020
Share on Facebook TweetTWEET Share on LinkedInShare on LinkedIn Print this pagePRINT THIS PAGE Email this pageEMAIL THIS PAGERSS 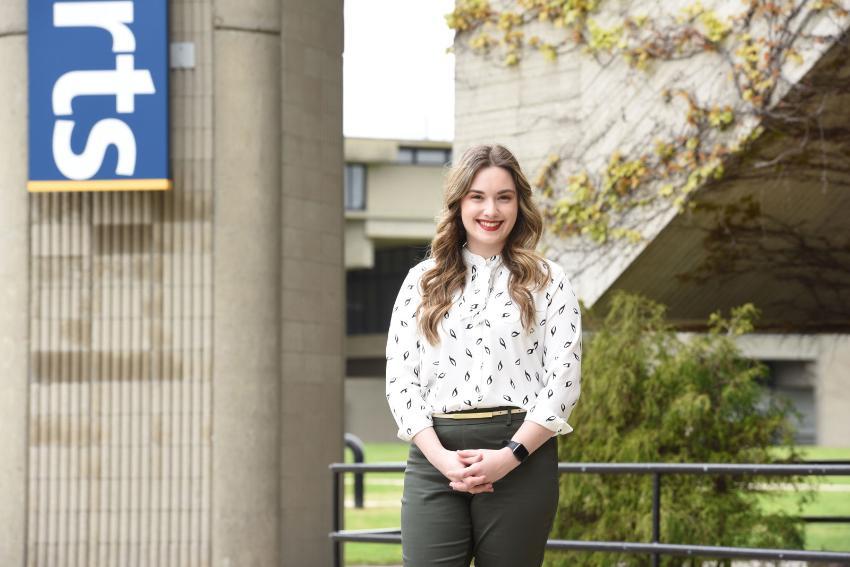 Following her presentation at the National Conference for Undergraduate Research in spring 2019, Chelsea's work "Flesh as Word: Reading and Writing the Black Female Body in Toni Morrison's A Mercy" was published as part of the conference proceedings. Her project examines how bodies are read in Morrison's text to make arguments about how female bodies subvert social and cultural expectations.

Chelsea's latest academic accomplishment also coincides with other professional achievements. The Department of English & Communication alum is currently working as an AmeriCorps volunteer through CityYear, teaching in an elementary school in Providence, taking graduate courses, and applying to graduate programs.

Imagine presenting your research paper to more than 4,600 people at a major university. Chelsea Cabral '19 did just that, and the experience was amazing.

"I liked being in an environment where people are so excited by what they're studying. There's so much great and infectious energy surrounding original research," Chelsea said.

Chelsea's research abstract on Toni Morrison's A Mercy was accepted for presentation at NCUR, the National Conference of Undergraduate Research, held at Kennesaw State University in Georgia in early April. Chelsea was the only representative at this conference from among all the UMass campuses. She also earned an Office for Undergraduate Research (OUR) stipend to present a second research paper at UMass Amherst later in the spring.

"I was offered a wonderful opportunity by OUR to enhance my knowledge of African American literatures authored by women, and particularly, those of the late science fiction writer Octavia Butler," Chelsea said. "I am indebted to my advisor Dr. Shari Evans and to the English and Women's & Gender Studies departments who have been extremely supportive of my endeavors as I continued to pursue and present my own research at academic conferences.

"The yearning to pursue independent research, which has been cultivated by the interdisciplinary nature of my undergraduate course of study, has been one of my greatest undertakings as a student."

The yearning to pursue independent research, which has been cultivated by the interdisciplinary nature of my undergraduate course of study, has been one of my greatest undertakings. 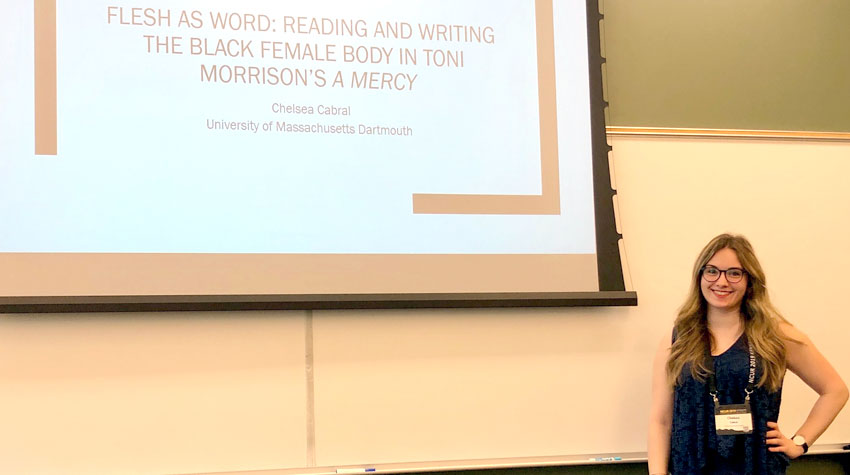 Presenting her research on author Toni Morrison at the National Conference of Undergraduate Research.

Benefits & challenges of a dual major

Chelsea has been a dual major in English literature and criticism and political science, and has minored in women's and gender studies.

"It was a challenge to spend an extra year in college to complete all of the degree requirements, but the biggest challenge was that it was so difficult. There were moments of self-doubt, stress, and exhaustion that come with completing a heavy course load on top of numerous extra-curriculars and a job outside of school. I had to learn to accept failure and imperfection, to ask people for help when I was struggling, and to say no to things. Although, if I had the chance to do college over again, I'd still double major and minor—I love learning—and my course of study became so much more enriching because of it. My heart is ultimately with the field of English, but political science and women's and gender studies were terrific complements to it."

Research is only one of Chelsea's many accomplishments and activities. She has served as editor-in-chief of The Torch, UMassD's student newspaper, overseeing a staff of more than 30 students: writers, editors, designers, and distributors.

"I started working at The Torch in 2016 as a staff writer—mainly as a way to improve my writing skills. Over the years I climbed the ranks and moved up to managing editor and then to editor-in-chief. I have learned how to delegate, lead with fearlessness, manage people and procedures, and communicate effectively. This year, my team and I worked to re-brand our website and social media presence, and created a cleaner and more professional layout for the newspaper."

She has also served as a writing tutor since 2015.

"Tutoring has only solidified my love for teaching, and it is a passion that I want to hone as I position myself for eventual graduate study in English. I started tutoring in 2015 as part of the English Department's class-embedded tutoring program. Then I began working at the university's Writing & Reading Center and was able to serve a wider swath of students from different disciplines. Tutoring for many years has taught me invaluable communication and interpersonal skills, but, more importantly, I was able to foster positive relationships with a lot of the tutees that I've had over the years."

Next steps: study abroad & a year of service

After graduation, Chelsea will study abroad at the Universidade Católica Portuguesa in Lisbon in June. Then she will take a gap year before graduate school, focusing on a year of service with City Year AmeriCorps.

"I will begin working with under-resourced schools in Providence, RI—providing emotional and academic support to students, while enhancing their passion for learning. To me, there is no better way to spend a gap year than being in an academic and collaborative environment and doing really rewarding work like that."

"Ultimately, I'd like to see myself in a place where my intellectual curiosity can continue to flourish, while still being of service to others. I'd like to come back to the university level to teach—while still being able to do research and write on important, timely, and fundamental points of interest in contemporary American literature and discourse."

The yearning to pursue independent research, which has been cultivated by the interdisciplinary nature of my undergraduate course of study, has been one of my greatest undertakings.

As a political science major, you will receive a BA in Political Science. You'll develop an understanding of political institutions and processes in the local, state, national, and global community. You'll be prepared to think critically and act effectively as an engaged citizen.