2019 was a year of many accomplishments for our campus community.

Growing into the future

As 2018 came to a close, we broke ground on our new residence and dining facility. Opening in 2020, Balsam Hall and Spruce Hall will house 1,210 first-year students with The Grove, a dining area with seating for 800, serving as a connector between the two residence halls.

The Massachusetts Board of Higher Education approved a Bachelor of Science in Interior Architecture and Design degree, establishing the only accredited program of its kind at a public university in New England.

For the second year in a row, UMass Law applications grew by more than 20%. Only nine of the 200+ law schools in the United States experienced at least a 20% increase in applications this year. UMass Law also saw a 21.5% first-year enrollment increase. Incoming student LSAT scores and undergraduate GPAs increased across the board, making the incoming class the most academically qualified in the history of the school.

A return to campus

UMass Dartmouth’s Commencement ceremonies returned to campus for the first time in two years at Cressy Field and the main auditorium. The Class of 2019 hailed from more than 33 countries, 34 states, and 257 Massachusetts communities. Over the course of four ceremonies, 1,450 bachelor’s degrees, nearly 500 graduate degrees—including 32 doctoral degrees—and 48 juris doctor degrees were conferred.

The Honors College was formed this year. The new college will provide students with a highly rigorous educational experience that emphasizes high-impact enrichment opportunities.

The College of Nursing and Health Sciences expanded to include the Medical Laboratory Science Department. The move positions UMassD to educate students who can contribute to the need for a team-based health care workforce in the community, the region, and beyond.

A. Lawrence Jenkins was appointed Dean of the College of Visual and Performing Arts.

In November, we hosted our second annual Marine Science and Technology Symposium, bringing together industry, academia, and policy leaders to promote marine-related growth. Discussions included the Public Policy Center’s final report on the region’s marine science and technology industry centers, a panel on the importance of innovation and collaboration in the local economy, and a panel on undersea defense research featuring members of the College of Engineering, Naval Undersea Warfare Center, Raytheon, Hydriod, and General Dynamics.

BayCoast Bank pledged $150,000 to the Blue Economy Initiative, a collaborative effort between the university and the SouthCoast Development Partnership to develop a “blue economy corridor” in Southeastern Massachusetts.

The Massachusetts Office of Business Development awarded the SouthCoast Development Partnership with $50,000 to promote economic development in the Blue Economy throughout the southeastern region through collaborative workforce and industry development programming.

Chancellor Johnson formalized a “town-gown” compact with the Town of Dartmouth at the First Annual Community Breakfast to strengthen an already strong half-century relationship between the university and town. Among the benefits the compact includes are an internship pipeline from the university to town hall, opportunities for students to engage with the business community, and increased communication to town residents regarding the UMassD cultural and recreational activities open to town residents.

The National Oceanic and Atmospheric Administration (NOAA) announced the School for Marine Science and Technology as a new member of the Woods Hole Oceanographic Institution hosted Cooperative Institute for the North Atlantic Region (CINAR). CINAR, a NOAA-supported, non-federal organization, conducts and coordinates cutting-edge research engaging both NOAA and academic scientists to enable informed decisions by NOAA for sustainable and beneficial management of the northwestern Atlantic shelf ecosystem.

In April, we signed a cybersecurity education and workforce development agreement with the Air National Guard. The university and 102nd Intelligence Wing at Joint Base Cape Cod will collaborate on program development.

A year of success

UMassD researchers were awarded a $2,116,315 grant by the National Science Foundation to help elementary school teachers integrate problem-solving skills common for computer programming into their math and science classes.

The College of Nursing and Health Sciences hosted a Global Health Summit this past spring, highlighting the work of Partners in Health and overseas initiatives led by UMassD faculty and spring. 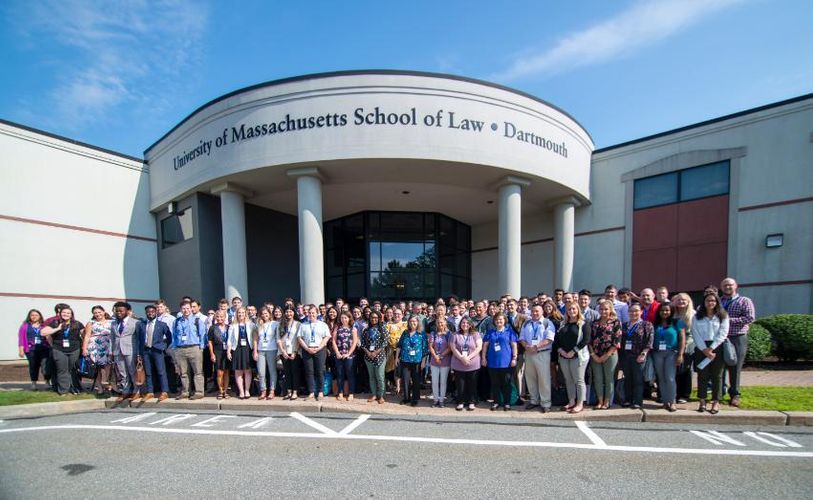 The Princeton Review named UMassD one of the nation’s most environmentally responsible colleges for the 8th year in a row, recognizing us for our sustainability and refuse diversion efforts.

This year, we launched the largest municipal battery storage system in the Commonwealth to reduce the electrical load of the university during peak usage times, reducing our impact on the environment and local grid resources.

Earlier this month, we signed the “Commitment Towards a goal of Zero Carbon Emissions,” an aspirational commitment that sets a goal of achieving zero carbon emissions.

You will pursue a well-rounded interior architecture and design degree that integrates technical know-how and artistic vision, develops your creative potential, and helps you launch your career.