The aspirational document looks to create a more sustainable UMassD

Today, UMass Dartmouth signed the “Commitment Towards a goal of Zero Carbon Emissions”. This aspirational commitment sets a goal of achieving zero carbon emissions by 2030, or alternatively 2050 (the standard now being considered for Massachusetts), and preparing students to live and work in a sustainable manner, conducting research that encourages climate sustainability and resilience, and keeping the University community fully informed regarding progress related to environmental sustainability and climate resilience.

In 2007, the university made a commitment to reduce greenhouse gas emissions and released a climate action plan in 2010 to achieve that goal. Today’s commitment kicks off a new step in the university’s dedication to the importance of climate change.

“Today we acknowledge that climate change is real, and is a force that we all must take seriously,” said Chancellor Robert E. Johnson. “Everyone who has the ability to make a difference owes it to the students in this room, across this campus, and around the globe, including our children and grandchildren, to do their best in confronting climate change. That is why we are here, to affirm UMass Dartmouth’s commitment to doing our part to create a more sustainable future.”

The commitment comes as the university continues to design a new energy master plan that will provide new opportunities to move systematically towards sustainability goals. The commitment calls for the university to use its voice and influence to encourage stakeholders in government, the University of Massachusetts System, and private industry to reduce their carbon emissions. Importantly, UMass Dartmouth will focus on preparing students to live and work in a sustainable manner, conduct research that encourages climate sustainability and resilience, and keep the university community fully informed regarding progress related to environmental sustainability and climate resilience. 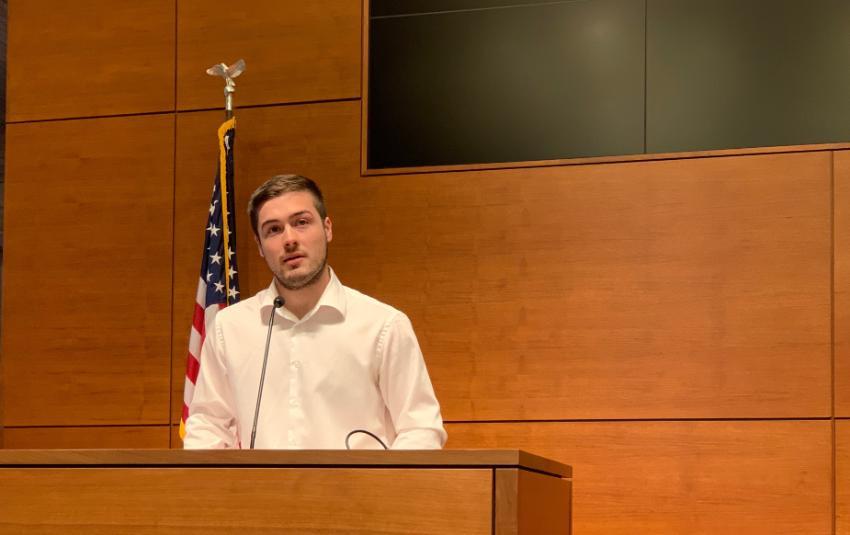 The commitment was a collaborative effort with student groups, including the UMassD Chapter of the Sunrise Movement. “UMass Dartmouth, by signing this commitment, is telling our generation that it recognizes the climate crisis, that it recognizes the need for action, and that it recognizes our movement,” said Chapter President Nathaniel Roberts. “I know I am proud to be a student at UMass Dartmouth, now more than ever. For the larger movement, this is a piece in the puzzle. Much like the climatic shifts happening in our natural world, this is indicative of a climatic shift in our politics.”

“I want to thank the students who worked with us on this commitment and have been active in their communities pushing for change. Look around the globe and you will see young people leading the way on this issue and though our problems are daunting and the future unsure, that fact gives me hope,” stated Chancellor Johnson. 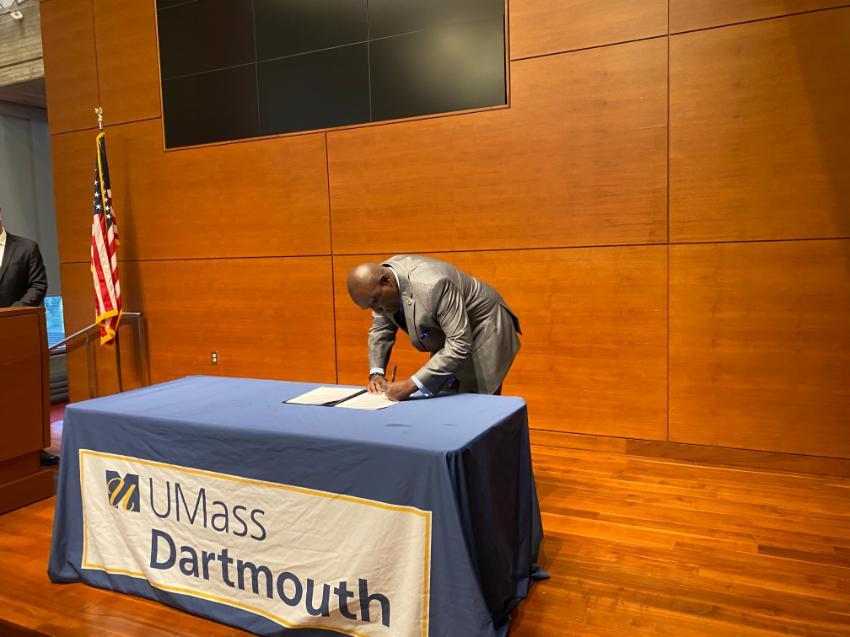 UMass Dartmouth has a proven record of sustainability. In 2019, the Princeton Review named the university as one of the nation’s most environmentally responsible colleges for the 8th year in a row. As part of its efforts to create a robust ecosystem of sustainable initiatives, in the summer of 2019, the university launched the largest public battery storage system in Massachusetts. The 520 kW system, in combination with other measures, will reduce the electrical load from the grid during peak usage times. The new battery was the latest in a series of campus sustainability infrastructure upgrades, including a 1.6MWh Co-generation plant and 369 kW of solar photovoltaic panels.

Announced in 2019, the U.S. Environmental Protection Agency (EPA) named UMass Dartmouth as the "College/University Partner of the Year" for the 2018 national WasteWise awards. The UMass Dartmouth Dining Services team was recognized for their proper management of purchasing and food production to minimize leftovers. Dining Services also donates unsold, prepared packaged foods weekly during the school year to local liturgical ministries serving the homeless.