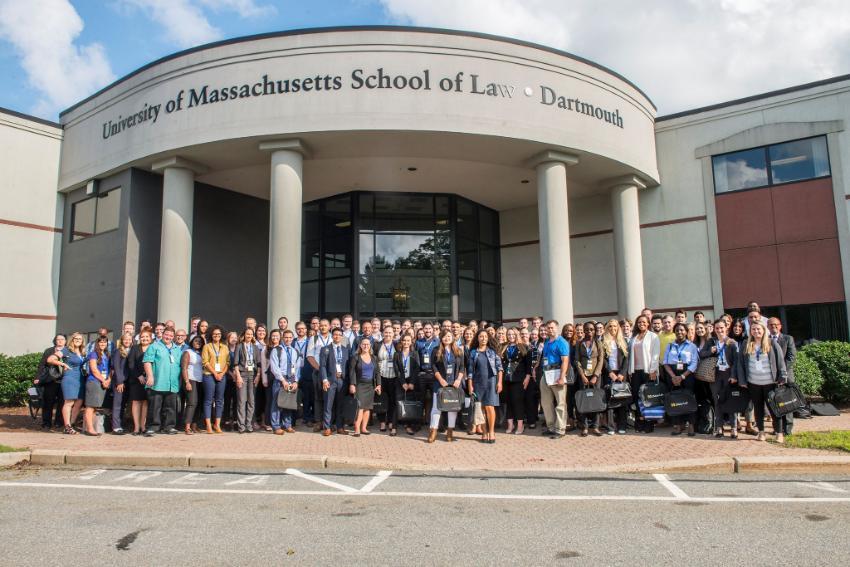 The UMass School of Law, which began classes this week, saw a 17.5 percent increase in its first-year student enrollment, from 80 to 94 students, while continuing its steady improvement in the LSAT scores and undergraduate GPAs of incoming students. The 2018 first-year enrollment is a 42 percent increase over 2016, the year the school received full American Bar Association accreditation.

Applications to the UMass Dartmouth-based school increased 20.2 percent, from 782 to 940. UMass Law has also become more selective, accepting 57 percent of its applicants, down from 64 percent last year. Improvements in LSAT scores and selectivity is a predictor of higher bar pass rates.

The first-year students entering in fall 2018 are from 12 different countries, 25 different states, and 71 different undergraduate institutions. The average age of the incoming class is 27, ranging from 21 to 61.

The UMass School of Law was established in 2010 and earned full ABA accreditation in 2016.

The school ranks 4th in Massachusetts and Rhode Island behind just Harvard, Boston College, and Northeastern in the percentage of its graduates securing a job that either requires bar passage or for which attending law school is a genuine demonstrable advantage.

In 2017, UMass Law ranked #1 in New England and #11 in the nation for percentage of graduates in public service jobs (27 percent).

The school is among the most diverse law schools in New England with approximately 30 percent of its students being persons of color.

UMass Law students have delivered more than 117,000 hours of pro bono legal services to the community since 2010.

UMass Law operates Justice Bridge, a law practice incubator in New Bedford and Boston that matches recent law graduates with seasoned mentors to provide legal services to individuals who otherwise could not afford representation. Since 2014, Justice Bridge has served thousands of modest means clients in housing, family, and immigration cases.