The past year was one of great momentum for an evolving UMass Dartmouth.

In early February, the university unveiled a comprehensive master plan focused on the renovation, repair, and replacement of buildings and infrastructure. The plan, as Chancellor Johnson said, "envisions UMass Dartmouth as the Tier 1 national research university that our students, our faculty, and this region deserve."

In July, the UMass Board of Trustees approved a $133.9 million plan to replace the university’s first-year student residence halls and enhance student dining facilities. The Board also gave initial approval to a $54.4 million renovation of the university’s science and engineering building. Future initiatives include renovation and modernization of academic buildings, the campus center, road infrastructure, and athletic facilities.

As 2018 drew to a close, a key project was already underway. UMass Dartmouth celebrated the groundbreaking for construction of a transformative $134 million student housing and dining complex. 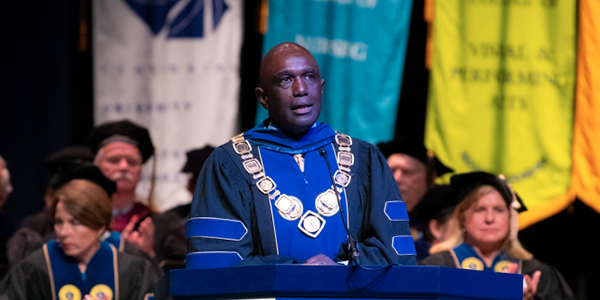 A week-long celebration of the strengths and achievements of students, faculty, staff, alumni, and the region culminated on April 20 with the formal inauguration of Robert E. Johnson, PhD, as Chancellor.

In his inauguration address, Dr. Johnson urged students to "fight for your dreams" and to "invent the future in a way the world has never ever seen."

A major highlight was a symposium titled Catching the Next Wave: Building the Blue Economy through Innovation and Collaboration. The event was co-hosted by the National Council on Competitiveness and included leaders from academia, business, and government addressing the opportunities in developing the Blue Economy of the state and region.

Office of the Chancellor

April's Catching the Next Wave symposium generated consensus that the SouthCoast has the potential to build a job-creating, income-increasing "Blue Economy Corridor" in southeastern Massachusetts.

Leaders in research and innovation

UMassD faculty search for solutions to the world's problems and make discoveries in every discipline. Faculty in the news in 2018 included:

The university's overall enrollment grew this past year, driven by increases in new undergraduate students. Enrollment of new first-year students increased 7.7 percent while the number of transfer students, including those who transferred from Mount Ida College, increased 20.2 percent.

When Mount Ida College announced in the spring that it would close, UMass Dartmouth offered a warm welcome to the displaced students, empowering them to complete their degrees as seamlessly as possible.

At the graduate level, overall enrollment grew 1.9 percent, from 1,642 to 1,673. This was driven by the School of Law, which enrolled 94 new students this fall, a 17.5 percent increase over last year.

UMassD achieved new recognitions this year, including a listing in The Princeton Review's Guide to 399 Green Colleges.

Results from the July 2018 Massachusetts Bar Exam demonstrate the success of the only public law school in the Commonwealth. The first-time pass rate for UMass Law graduates was 92.6 percent, the third highest pass rate in the state.

As a recipient of a 2018 Kendall Foundation Food Vision Prize, the university will create educational opportunities for students to learn about the importance of using local, sustainable food.

Officials from Portugal's Camões Institute, the lead Portuguese government unit responsible for the internationalization of higher education, extended a partnership agreement between the two institutions for two more years, funding students as they pursue their doctorates and assist in the teaching of Portuguese language courses.

The university added new degrees and concentrations this year to address emerging disciplines and to strengthen current workforce competencies. New degrees include:

The College of Engineering created new concentrations in the growth fields of biomedical engineering, cyber security, and environmental resources engineering.

Year of the astronaut

For UMassD, 2018 was the "year of the astronaut," as alumnus Scott Tingle '87 spoke to students and faculty live from the International Space Station in March and returned to campus in November to share his experiences as an astronaut and the inspirational story of his success. The conversation provided students from UMassD and area K-12 school districts an opportunity to discuss with a graduate how to apply their degrees.

Tingle graduated from Southeastern Massachusetts University (now UMassD) with a bachelor's degree in mechanical engineering in 1987.