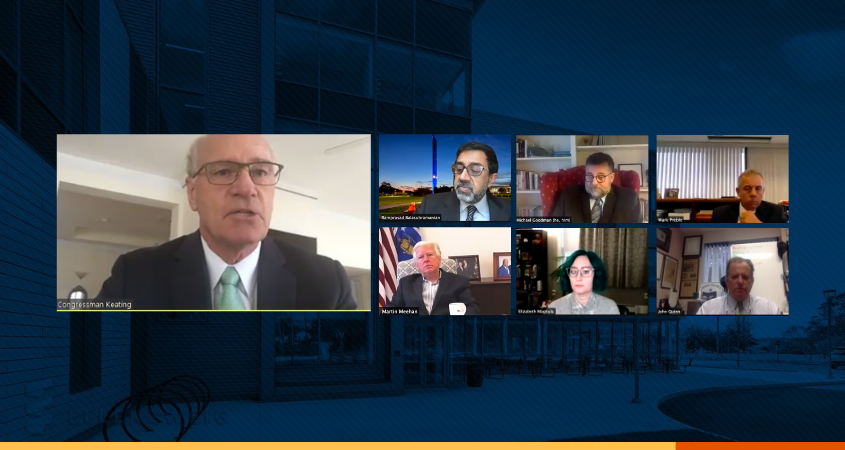 The full announcement event can be seen here.

This second award from the United States Navy will create new opportunities for regional collaborations across academia, industry, and the military. New projects look to address problems of naval relevance in the areas of batteries, acoustics, modeling of ocean dynamics, biofouling, composite materials, autonomy, machine learning, and marine robotics. The grant will be administered by the Marine and UnderSea Technology research program (MUST), which was formed to address the needs of the Navy and the defense industry by developing innovative faculty research and a pipeline of highly trained workers.

“With this latest award from the U.S. Navy, UMass Dartmouth has once again proven its leadership in research and development for the marine technology sector. I am proud that our faculty use their research expertise to foster regional industry collaborations that continuously build a blue economy business and innovation ecosystem,” said UMass Dartmouth Acting Chancellor Mark Preble. “A special thanks to Congressman Bill Keating, who understands the practical importance of UMass Dartmouth’s marine science and technology research to our region’s economic health and our country’s defense needs. I want to thank Congressman Keating and the entire Massachusetts Congressional Delegation for supporting our university’s blue economy ambitions.”

“Southeastern Massachusetts is well-positioned to be the national leader on blue economy projects, and this $4.25 million grant from the Office of Naval Research reaffirms what we already know: that UMass Dartmouth is uniquely positioned to lead the region forward as a blue economy hub,” said Congressman Bill Keating. “I was proud to work to secure an increase in the Navy’s Research, Development, Testing, & Evaluation budget, and it’s great to see some of that money coming back to the district. The cutting-edge research undertaken at UMass Dartmouth will assist the Navy and sailors stationed throughout the world, and that is something our region should be proud of.”

“With this grant award from the Office of Naval Research, UMass Dartmouth is once again demonstrating its excellence in marine science technology and engineering, an economic sector that will be critical to the future of the region,” UMass President Marty Meehan said. “I want to thank Congressman Keating for his support of this initiative and congratulate the outstanding faculty whose research expertise attracted this investment.”

To respond to the needs of the Navy, MUST has focused on areas that can both address short-term concerns and long-term goals. These areas of study include autonomous underwater vehicles and increasing their battery life, biofouling, composite materials, machine learning with marine robotics, modeling of ocean dynamics, and the use of undersea acoustics for communications and sensing technologies.

“UMass Dartmouth is the public research university for the South Coast of Massachusetts and a crucial driver of the state’s blue economy. The $4.2M grant from the Office of Naval Research will fund new marine science projects and help to cement the region and state as an international hub for advanced marine technology. This robust and consistent federal investment in UMass Dartmouth’s MUST Research Program is a testament to the strong partnerships and future collaborations being developed between the Navy and the UMass Dartmouth community,” said Senator Edward Markey.

“This grant is a testament to the students and faculty at UMass Dartmouth and their essential research in marine technology,” said Senator Elizabeth Warren. “The Navy’s investment in the Marine and UnderSea Technology research program will help UMass Dartmouth and the South Coast continue to lead, innovate, and advance the Commonwealth’s Blue Economy.”

“Building a Blue Economy that creates jobs, protects our environment and strengthens our region for generations requires investments in the students and researchers leading our way. Empowered by this historic grant, the UMass Dartmouth MUST Research Program will continue to chart a path towards establishing an international hub for advanced marine technology throughout Southeastern New England,” said Congressman Joseph P. Kennedy III.

This latest award showcases UMass Dartmouth’s continued leadership in marine science and technology education and research. Since 2015, the Navy has awarded the university with 21 grants worth nearly $14 million in investment.

“UMass Dartmouth’s evolution over 125 years from textile technologies to leading edge cyber security and marine technology research shows their commitment to continued excellence. The Naval Undersea Warfare Center Division Newport values the long standing relationship we have with UMASS Dartmouth, and are excited to expand our collaboration in undersea technology development through their MUST program into the future,” said Jason Gomez, Chief Technology Officer at the Naval Undersea Warfare Center Newport.

“This investment builds off of UMass Dartmouth’s long-standing specialization in marine science and technology fields by connecting our students and researchers to emerging technological challenges of regional and national significance,” said Associate Provost Ramprasad Balasubramanian, who leads the Marine and UnderSea Technology (MUST) research program. “MUST provides a wellspring of talent and technologies to the U.S. Navy and the companies they partner with, while further cementing the university’s role in the regional marine science and technology innovation economy.”