On October 8 and 9, more than a thousand members of the UMass Dartmouth community including hundreds of alumni celebrated Corsair pride on campus during Blue & Gold Weekend.

The University’s commitment to service continued Friday with UMassD Engage: A morning of service. Members of the UMassD community spent the morning volunteering at local community organizations and on campus. 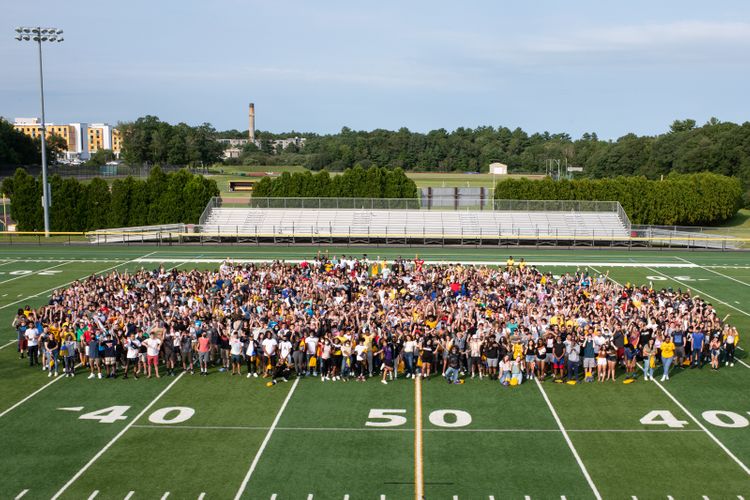 The Quad was the place to be on Saturday morning.

The Blue & Gold Festival brought together students and their families as well as alumni, faculty, staff, and members of the SouthCoast community for a day of entertainment, food, and fun. The festival featured Arnie and his local mascot friends including Pat Patriot, ax throwing, a bouncy house, and a petting zoo with pony rides. The action moved down to Cressy Field in the afternoon to watch the UMassD Football team take on Mass. Maritime. As the teams warmed up, alumni gathered at the Corsair Beer Garden outside Cressy Field for reunions and lawn games before filling the stands. After Chancellor Fuller officiated the ceremonial coin flip, the Corsairs gave the UMassD crowd a homecoming worthy performance with a 26-10 win. With the win, UMassD stays perfect at home with a 3-0 record at Cressy Field. The weekend also featured two other home athletic competitions. The Men’s Soccer team tied Keene State drew nil-nil while Field Hockey won 3-2 over Framingham State. At halftime, the Corsair community honored field hockey alum Robin Dziedzic Drew ’07, who was inducted into the Little East Conference Hall of Fame in 2020. Blue & Gold Weekend was full of UMassD pride across campus, and everyone at the university can’t wait to see you next year!