The international collaboration will promote educational, research, and economic opportunities

On December 17, UMass Dartmouth and the Portuguese Republic signed a Memorandum of Understanding (MOU) focusing on promoting and developing academic, research, and economic collaborations within the coastal and ocean science and technology disciplines.

"Here at UMass Dartmouth, our scholars and scientists are national leaders in fields crucial to marine health and conservation, including assessing environmental impacts and improving key technologies," said UMass Dartmouth Chancellor Mark A. Fuller. "It is critical we share our knowledge with our Portuguese partners, who are doing so much to promote sustainability and marine science. This memorandum of understanding is a testament to the power of discovery, partnership, and collective academic accomplishments." 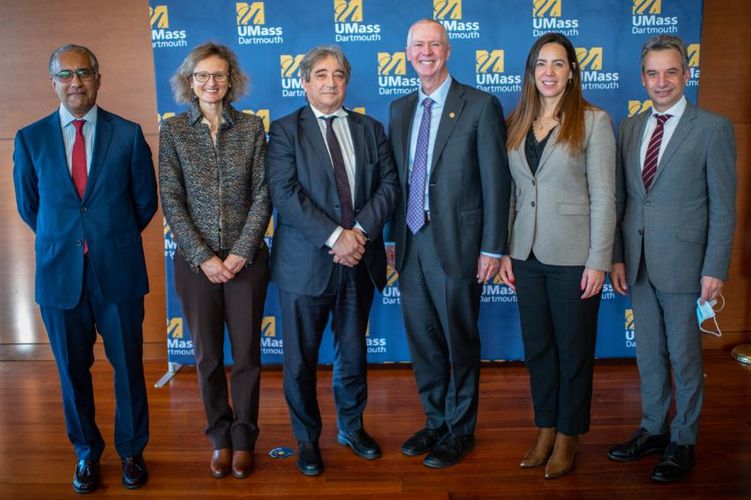 Members of the Portuguese delegation with Chancellor Fuller

"Southeastern Massachusetts is the hub for the Blue Economy, offshore wind energy, and Portuguese culture in the United States, and this MOU further demonstrates that our region is recognized for its strengths not only nationally, but internationally," said Congressman Bill Keating. "I am grateful for the leadership of Chancellor Mark A. Fuller and Director-General Helena Margarida Moreira de Oliveira Vieira in bringing this MOU to fruition and look forward to seeing the dividends that this scientific diplomacy will produce for years to come."

"The UMass Dartmouth and Portuguese Republic partnership is a terrific opportunity for cutting-edge research and development, economic growth, and deeper cultural ties. I applaud this effort to bolster our Portuguese-Bay State relations," said Congressman Jake Auchincloss.

The MOU will build on the maritime strengths of Portugal and the research expertise of UMass Dartmouth through the School for Marine Science & Technology (SMAST) and the Marine and UnderSea Technology research program (MUST). UMass Dartmouth is currently collaborating with industry, military, and government partners on various high-impact projects. Researchers are studying the environmental impacts of burgeoning offshore wind farms, developing autonomous underwater vehicles and machine learning for the U.S. Navy, and studying the breakdown of microplastics in the world's oceans.

The agreement also calls for the exchange of scientists, researchers, technical experts, scholars, and students from UMass Dartmouth and Portuguese higher education institutions. Other formal collaborations include joint research studies, seminars, and conferences. 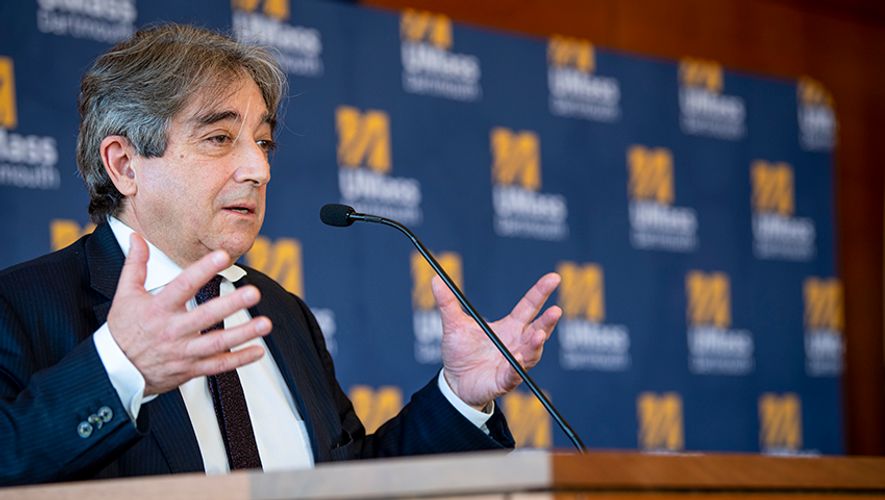 "The strategic partnership that this memorandum formalizes will greatly benefit our region," said State Senator Michael J. Rodrigues (D-Westport), Chair of the Senate Committee on Ways and Means. "An exchange of knowledge and expertise will strengthen the foundations of the Blue Economy, higher education, and scientific research in the SouthCoast. I applaud Chancellor Fuller and the UMass Dartmouth team for this milestone achievement."

"The signing of this MOU is a testament to the cultural, maritime, and economic ties between the South Coast of Massachusetts and Portugal. The collaboration between our communities is rooted deeply in our histories but has also evolved over time to meet new global challenges," said State Representative Antonio F. D. Cabral. "This agreement cements UMass Dartmouth as an internationally recognized incubator for the Blue Economy. Researchers from the School for Marine Science & Technology (SMAST) and the Marine & Undersea Technology (MUST) program will collaborate closely with their Portuguese counterparts on wind technology, marine & ecological sustainability, and coastal and ocean policy – the effects of which will be felt for generations to come."

"This auspicious occasion marks an important first step towards expanding the vital academic and scientific connections between Portugal and UMass Dartmouth," said Michael Goodman, Acting Provost and Vice Chancellor for Academic Affairs. "The collaborations envisioned in this agreement promise to advance our educational and research mission, support important efforts to promote coastal and oceans sustainability, and help position both the SouthCoast and the Portuguese Republic to benefit from the substantial economic opportunities presented by the Blue Economy."

While on the main campus, the Portuguese delegation visited the Ferreira-Mendes Portuguese-American Archives. The archives contain the world's most extensive collection of genealogical records, newspapers, books, recordings, family photographs, scrapbooks, business records, and correspondence that document social history, illustrating the collective experience of immigration, settlement, and life in the United States for Portuguese-Americans. The delegation also toured the university's SMAST facilities in New Bedford, where they met with faculty and students and examined the school's cutting-edge blue economy laboratories and research projects.