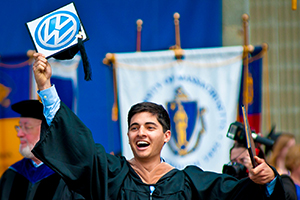 "Guten tag was all the German that I knew at the time of my arrival," he said. "I started taking language courses almost immediately."

Jonathan participated in the program in 2009 when he was a sophomore marketing major. Part of the appeal was that Wolfsburg is also the world headquarters for Volkswagen. And Ostfalia University works closely with the Volkswagen Group.

"Volkswagen had always been a part of my life," said Jonathan. "It completely shaped my high school and college experience. I've had a passion for cars since I was seven years old. In high school, that passion built a set of best friends: we all worked on cars together, doing everything from car-audio systems to turbo swaps on nights and weekends. In college, it led me to found a car club on campus and my own business to help build my Volkswagen Jetta with the performance parts I wanted.

"I did everything from creating/editing videos for my department to assisting in running a sales training event for the Passat B7 in Amsterdam," Jonathan said. "I learned the basic business processes of Volkswagen, began my life in the world of business, and experienced a great amount of self-development.

"Doing an internship in a foreign country was an absolutely eye-opening feeling. Having never been outside the US before the internship, it was a very unfamiliar feeling at first. That gradually wore off, and resulted in exponential personal growth."

Now Jonathan is a product manager at Volkswagen AG: the dream job, which he attained through three years of internships, continuously proving himself to the company. He completed four classes in a summer semester so he could graduate while still in Germany.

I was hesitant, but as soon as I stepped out of the train station in Wolfsburg, it hit me: this could be my life. That's when the dream started to become more clear.

"It's a once-in-a-lifetime opportunity to open yourself to personal growth, international culture, and perhaps what could result in a life-changing experience."

He added: "I'm thankful and grateful to have had two strong and positive professors in my life: Jack Chopoorian, who offered me the chance to go to Wolfsburg; and Godwin Ariguzo, who has been supporting me since the beginning. I will cherish the numerous times they pushed me in the right direction when I wasn't sure of which way to go. They believed in me. They took a scared 19-year-old, helped steer me in the right direction, and successfully changed my life for the better."

Three years after the program, I'm living in Germany, working at my dream job, at my dream company: Volkswagen AG. Simply put, ISU Wolfsburg changed my life for the better.

Three years after the program, I'm living in Germany, working at my dream job, at my dream company: Volkswagen AG. Simply put, ISU Wolfsburg changed my life for the better.