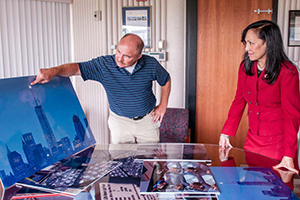 The official lighting of Berg’s "Beacon of Freedom" was tentatively scheduled for September 11.

Berg recently visited with Chancellor Divina Grossman to explain the engineering behind the beacon's beehive-like design, which is postioned at the top of the Freedom Tower’s 408-foot antenna. When illuminated at night, the beacon will send out a horizontal light beam that will be seen from miles away.

Berg and his staff at Carpe Diem are able to create solutions to engineering problems in days rather than weeks—inventing and testing prototypes, then making a core mechanism that can subsequently be used for more than one project.

"We take a good idea and make the process happen," said Berg. "We are able to make different prototypes for different projects and then focus on what will really work."

From active student to community-minded philanthropist

A mechanical engineering major at UMass Dartmouth, Berg recalled that his education extended far beyond the classroom to activities such as student senate, resident assistant, and the theater company. The experiences, he said,  "gave me the chance to have different friends and helped me grow as a person."

Following graduation, Berg pursued a career in product development for spaceship engines and later earned his master’s degree at MIT.

Berg is also a civic-minded philanthropist who has turned part of the Carpe Diem facility into an indoor soccer arena for the Franklin Youth Soccer League and the Franklin Soccer School, as well as for adult leagues, summer camps, and pick-up games.

True to the meaning of carpe diem, Berg is a UMass Dartmouth alumnus who continues to "seize the day."

It is important not just for the technical movement but more so to be a part of a permanent landmark. That is amazing.

It is important not just for the technical movement but more so to be a part of a permanent landmark. That is amazing.