DJ Shayna Michaud shares her music with the world

First-year Shayna Michaud is in her fourth year of working as a DJ at WUMD 89.3FM. 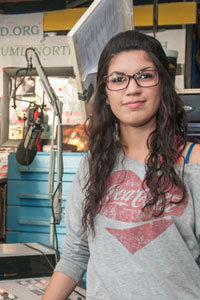 ‌Shayna Michaud '17 is a freshman, but she's in her fourth year of working as a DJ at WUMD 89.3FM, UMass Dartmouth's radio station.

She began DJ'ing when she was a sophomore at nearby Bishop Stang High School.

"A friend told me that WUMD was offering the opportunity to be a DJ, so I took the training, and fell in love with it.

"There certainly are lots of buttons and gadgets in the studio," she added,"but it wasn't that difficult once I learned what the buttons do when you click them."

"We have an entire rack of new music, so there is always new stuff coming in. I play a lot of local music on my show, and even get to interview some cool cats."

"They were amazing! They are really cool dudes. Friendly and funny," she said.

"Their music is great, and I would suggest that people who like rad alternative music check it out. I know they just finished up a tour, and they are out and about playing shows."

Planning a career that links psychology and music

Although Shayna had already thought about attending UMass Dartmouth, "being a DJ here definitely played into my final decision. I really like it here."

A psychology major, she plans to pursue advanced studies with the goal of becoming a children’s therapist. Music will continue to play an important role in her life.

"I want to incorporate music into my practice working with children," she said. "I think that music can be therapeutic, and I hope to use it when treating patients."

Listen live online as well as on the radio dial.

The station offers DJ training at the beginning of each semester, which is open both to students and members of the community. More information

I love sharing my music with the world. It’s the highlight of my week! Being a DJ at WUMD definitely played into my decision to attend UMass Dartmouth.

I love sharing my music with the world. It’s the highlight of my week! Being a DJ at WUMD definitely played into my decision to attend UMass Dartmouth.