One of six entries selected for SOFA's university exhibition

"City of Light" was one of six entries in SOFA's highly competitive CONNECT exhibition featuring design environments created by international art and design university departments. Incorporating seating, lighting, and objects, the installations are created by students under the guidance of faculty advisors.

Representing UMass Dartmouth at SOFA were students Kelsey Thornton, who is pursing a post-baccalaureate certificate in wood/furniture, and Lillian Webster, who is pursuing an MFA in metals. A third graduate student, Emre Bağdatoğlu, helped design the installation. They initiated and developed the proposal with the guidance of former lecturer Adam Manley; Charlotte Hamlin, coordinator for graduate studies and research, was the faculty advisor.

Conceptualization began in May as the team considered ideas and the overall design aesthetic for the project.

"It was clear from the beginning that our concept for the SOFA CHICAGO CONNECT exhibition would be tied directly to the historic roots of New Bedford, Massachusetts," said Lillian.

UMass Dartmouth's Star Store—which houses the four Artisanry programs of ceramics, metals, fibers, and wood—is located in the heart of downtown New Bedford. With lamppost-lined cobblestone streets, captains' mansions, and other historic sites, the city overlooks a ship-lined waterfront that is both scenic and inspirational.

"We took as our starting point New Bedford's historic past as a 'city of light,' owing to the massive quantities of oil that its whaling industry produced," Lillian added. 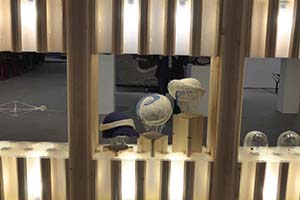 New Bedford whale oil lit street lamps and homes in the SouthCoast and around the world—and the installation re-imagines the street lights as modular building blocks. The re-envisioned lamppost form allowed the students to address both spatial and practical concerns, as well as providing numerous variations in structure. The modular blocks served as benches, lampposts, walls, and shelving areas within the environs.

"Light plays a major role within the concept and realization of our spatial environment, but it is an equally important metaphorical tool," said Lillian.

The students' creative statement for "City of Light" noted: "Our goal was to shed light, not just literally, but figuratively, on the city of New Bedford, whose glory days of wealth and prosperity have faded into the past, but whose creative history lives on.

"It is this creative energy that sustains the community, drawing new talent to the university and the city today. This talent is the single most important factor in New Bedford's revitalization, and it deserves to be brought out of the dusky corners and dimly cast shadows that characterize much of the outside perception of this great city."

Through the use of soft lighting, an uncluttered visual space, and minimal enclosure, "City of Light" achieves an engaging and inviting area. The installation divides the space into two separate but seamlessly integrated areas: the first mimics a street promenade with two rows of lampposts and benches, which allow guests to walk through the space unhampered by solid enclosures; the second is a cozy area where visitors can sit, enjoy the diffused lighting, and investigate the subtle details inscribed throughout the installation.

"Our spaces offer both freedom of exploration as well as comfortable relaxation. Our intent was to create an inviting light oasis amidst the sensory bombardment that typically characterizes large-scale expos," said Kelsey. 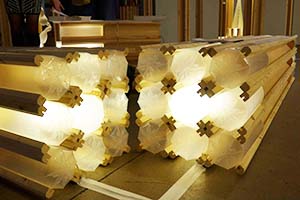 The CONNECT exhibition represented an opportunity to showcase the artistic and creative talent that thrives in New Bedford, from the students on the design team to College of Visual and Performing Arts (CVPA) students and alumni who were commissioned to create unique lampshades for each of walkway's lampposts. "City of Light" also provides space for seven students and alumni to display their SOFA-oriented work.

The installation created cross-disciplinary connections first within the university and then to Chicago for SOFA, which annually hosts an average of 80 dealers and 35,000 visitors.

Next, the students envision a life for "City of Light" beyond SOFA CONNECT. They'll explore a connection with AHA!, New Bedford's monthly celebration of arts and culture that unites downtown galleries, museums, restaurants, and schools.

"As a semi-permanent or floating environment which could be installed in the downtown area, 'City of Light' would serve as a testament to the city's history and its potential for revitalization," Kelsey said.