Sidafa Conde '12: Pursuing a PhD in Engineering and Applied Science

Sidafa Conde is pursuing his PhD in Engineering and Applied Science with a focus in Computational Science and Engineering. 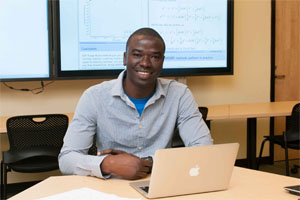 ‌Graduate student Sidafa Conde '12 is pursuing his PhD in Engineering and Applied Science with a focus in Computational Science and Engineering. Sidafa began his academic career at UMass Dartmouth as an undergraduate, double majoring in Accounting and Computational Mathematics.

The New Bedford resident was selected to participate in the national 2014-2015 Extreme Science and Engineering Discovery Environment (XSEDE) Scholars Program and the Brown-Kobe Joint Simulation School, an educational exchange program between Brown and Kobe universities.

A future in computational finance

Sidafa is currently working with Dr. Sigal Gottlieb on SSP Downwinding, a project he began during his undergraduate career and has expanded upon now as a graduate student.

"My research projects and educational experiences have gone hand-in-hand. There have been times where my classwork has paid off in my research, and a lot of the things I've learned through my research have, in some way, been applicable to my classwork.

"I have no doubt that my research will positively impact my future plans because, fundamentally, the methods can be applied to different projects," Sidafa said.

Upon attaining his PhD, Sidafa would like to gain post-doctoral experience at a national lab or research institute. He hopes his experience in computational science will create opportunities for him in the field of computational finance.

"Computational finance is just one of the many branches involved in computational science and high-performance computing. There are a number of areas that similar modeling can make an impact on, and I’m interested in exploring some of these aspects as well."

Sidafa credits much of his success to the academic environment his professors have created.

"Without the assistance and guidance of the faculty, I wouldn’t have had as many experiences," he said. "My mentors have always treated me as a colleague rather than a student. They've trained me to be a mature researcher and a professional scientist."

Sidafa's undergraduate research assistantship with the math department prepared him for two Research Experience for Undergraduate (REU) opportunities. The first, in North Carolina, focused on analyzing risk, while the second, at the University of Maryland Baltimore County, involved scientific and research computing.

"I had professors who cared, who went above and beyond," he said of his undergraduate experience. "My advisors and professors taught me things I could use outside of class."

Sidafa has attended programs and conferences across the country and abroad.

"I've met great people and learned a lot from the presentations and discussions I've attended," he said, recalling the feeling of camaraderie at conferences. "It's fascinating to hear about the amazing things people are accomplishing within their respective fields."

Part of the Virtual Institute in Mathematical and Statistical Sciences (VI-MSS) and the National Science Foundation's "Science Across Virtual Institutes Initiative," the Brown-Kobe Joint Simulation School involved Sidafa attending lectures and training in high-performance computing for one week each at Brown University and Kobe University in Japan.

"It wasn’t like other high-performance computing programs I’ve attended in the past," he said. "I definitely learned a lot of new things from the program. It was also really cool to get to use such a powerful machine at Kobe University."

Sidafa is looking forward to the unveiling of the new ranking of the most powerful machines in the world at the upcoming conference for the Broader Engagement Program.

"The Broader Engagement Program, similar to XSEDE, will allow me to meet with top researchers and professionals in high performance computing, and attend technical sessions and workshops," he said.

The XSEDE Scholars Program gives students from under-represented groups the opportunity to learn more about high-performance computing, network with leaders in the field, and interact with fellow students from around the world.

Sidafa’s role was as the leader of a group of students, guiding them through the modeling and analysis challenge.

"Although we didn't win the competition, it was a lot of fun to work with students at all different skill levels in high performance computing. I was there to lend a hand if there was a problem that the group didn't understand," he said.

"I wanted the work environment to be similar to what my advisors have provided me—a collaborative effort where everyone’s thoughts and ideas were heard."

PhD in Engineering and Applied Science

My mentors have always treated me as a colleague rather than a student. They've trained me to be a mature researcher and a professional scientist.

My mentors have always treated me as a colleague rather than a student. They've trained me to be a mature researcher and a professional scientist.