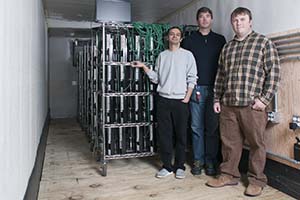 The PS3 cluster generates 50 billion keys per second. Its performance is comparable to nearly 3,000 processor-cores of a typical laptop or desktop. The supercomputer was constructed by Khanna, an associate professor of physics, working with a team of graduate and undergraduate students.

UMass Dartmouth currently has a 1 in 10 chance of winning the RC5 cryptography challenge, which is well-known in supercomputing circles.

American computer and network security company RSA Laboratories began the RC5 cryptography challenge in January 1997, presenting contestants with the opportunity to decode ciphers by finding secret cryptographic keys. The contest was initiated by RSA to demonstrate the security of various cryptography encryptions. Each of the contests is named after the variant of the "RC5" cipher used in corresponding distributed.net projects.

The PS3 cluster is used by UMass Dartmouth's Center for Scientific Computing and Visualization Research (CSCVR) to perform large and complex calculations to study black hole astrophysics and to explore vulnerabilities in cybersecurity.

Graduate students Tyler Spilhaus and William Duff of the Physics Department are already utilizing the system extensively for research projects in this context.

"The PlayStation cluster is an intriguing piece of technology that allows us to use modern gaming consoles for highly complex computations, like the numerical simulations I run in my research," Tyler said. "On a typical machine, those simulations would take months to run, whereas on the PlayStation, they only take a few days. It's cool to see a machine created for fun able to do great things for research."

In addition, Violet Pfeiffer, an undergraduate computer and information science major, will be using the system to study different aspects of cryptography and cybersecurity.

"It's amazing that everyday day consumer electronics can be used in such an unconventional, but powerful and cost-effective way," Violet said. "My interest in the PS3 supercomputer has drawn me in to doing research with Prof. Khanna. The supercomputer will be powerful enough for us to conduct our research in cryptography and cybersecurity and to estimate the threat that a similar system may pose to institutional cyber infrastructure."

The CSCVR provides undergraduate and graduate students with educational experiences in supercomputing and fosters collaborative research in the computational sciences within the university and with researchers at other universities, national labs, and industry. Khanna serves as associate director of the Center.

The Sony PlayStation 3 (PS3) gaming consoles are installed in a refrigerated shipping container with high cooling capacity, located on campus for convenient access to power and networking. This novel and extremely low-cost approach to creating supercomputing capacity was first pioneered by Khanna in 2007, when he built a small eight PS3 cluster and was able to perform research-grade simulations of black hole systems with it.

The method has been implemented for several years now at various locations around the world. The Air Force Research Lab (AFRL) in Rome, NY, used the same approach on a very large scale in 2010, using 1,716 PS3s, and was able to demonstrate ten-fold cost effectiveness of such a system over traditional supercomputers. The AFRL has now granted a significant chunk of their cluster to CSCVR.

"High-performance computing or 'supercomputing' by linking together a large number of computer processors in order to build a large parallel computer cluster is currently the most common approach towards solving complex computational research problems in nearly all areas of science and engineering," said Khanna.

"The largest supercomputers on the planet today that achieve petascale performance—several thousand trillion calculations in one second—have all been built using such a parallel cluster approach."

Khanna's research in theoretical and computational gravitational physics is supported by the National Science Foundation.

Read the Forbes article - "Modeling Black Holes With Sony Playstations: The Next Challenge"