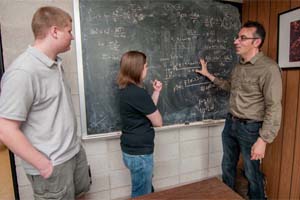 ‌Physics professor Robert Fisher and his students use the high-performance computing capabilities at UMass Dartmouth to understand, model, and make predictions about the universe. However, he still appreciates traditional approaches to learning, such as solving problems with students on the blackboard.

Dr. Fisher’s field is astrophysics: a branch of astronomy that explores the physics of the universe. He focuses on the formation of stars and their massively explosive endings, known as supernovae.

Probing the future of the universe

A member of UMass Dartmouth’s Center for Scientific Computing and Visualization Research, Fisher combines observation, theory, and high-level computer simulations to model the behavior of stars and star pairs.

“We’re using the power of supercomputing to learn more about how the universe works, what it’s made of, and what its future will be,” he said. “We’re at an exciting point where we can now begin to answer a number of fundamental, long-standing astrophysical questions by directly comparing simulation against observation.

Fisher has been fascinated by the stars and the planets as long as he can remember. Like many of his generation, he was strongly influenced by “the science fact and science fiction generated during the height of the US Space Age.”

“I was born less than two months before the last Apollo mission to the moon,” he said.

“On April 12, 1981, my teacher wheeled a large black-and-white television into our third-grade classroom so that we could watch the launch of STS-1—the first mission of the Space Shuttle Columbia, a special occasion I can still remember.

“The unmanned Pioneer, Voyager, and Viking space probes were sent on lengthy journeys across the unfathomable expanse of space to explore all of the planets in our solar system. In movie theaters and on television, we were inundated with films and series that spun the lush fabric of the modern mythology of science fiction from the bare threads of science fact. Over time, these interests matured into my pursuit of astrophysics as a career.”

Nurturing the next generation of scientists

The excitement of real discovery is tremendously inspiring! Students finally learn the importance of everything they've learned in the classroom . . . and head back there with a renewed dedication and focus.

In addition to pursuing his own research on turbulence and its application to astrophysics, Fisher leads a group of graduate and undergraduate students who are pursuing exciting research into the stars. Asked about the importance of encouraging student researchers, he shared a story:

“I recently had the opportunity to watch Particle Fever, a documentary which portrays the real-life drama of the search for the Higgs boson at the Large Hadron Collider in France and Switzerland. In one segment, they interviewed Nima Arkani-Hamed, a classmate and friend of mine from my graduate days in Berkeley, who is now at the Institute for Advanced Studies in Princeton, and who has been one of the most creative contributors to our understanding of the fundamental particles and interactions of the universe. He describes how in his view, the Institute for Advanced Studies, which has no students and whose faculty are under no obligations to teach, is one of the few perfect academic institutions in the world.

“My own view is rather the opposite," Fisher noted. "The education and training of the next generation is really the pinnacle of what we achieve in higher education.”

It begins in the classroom.

“Classwork can seem a bit contrived,” he said. “It's really a cultural construction designed to pass on a shared body of knowledge.

“Think of science as a long conversation, going back hundreds of years. As a student in the sciences, you walk into the room, and at first you don't even understand the language, much less grasp all of the nuances of this epic debate that is going on, as generations of people passionately struggle to figure out the workings of Nature. We begin to bring students into the conversation in the classroom. That's where they learn the grammar of the field and begin to grasp the flow of the conversation."

But it’s in the research lab where “the rubber hits the road.”

“In the glow of a computer monitor, at a dusty chalkboard—that's where we push our understanding, and where the real truth of Nature is revealed. Students connect what they've learned in the classroom to the real world. The excitement of real discovery is tremendously inspiring! Students finally learn the importance of everything they've learned in the classroom all these years, and head back there with a renewed dedication and focus.

Fisher’s dedication to his students—encouraging research, nurturing careers—can be traced back to his own memories of mentorship.

“I’ve benefited from the mentorship of many individuals over my career, but one particularly crucial mentor for me was Thomas Tombrello. I arrived at Caltech as a precocious but tremendously naïve seventeen-year old. Tombrello took a group of five freshmen each year into his research group, and mentored them in a special research seminar.

“Quite imprudently, my freshman year, I skipped ahead a year, and took a bucket load of extremely challenging physics and mathematics courses on top of required courses in chemistry, the humanities, and the social sciences. The classwork was definitely more than enough to fry anyone, but Tombrello did a great job in mentoring us on real research projects, which is a great way to stay inspired and keep your eye on the ball, so to speak.”

The work he pursued with Prof. Tombrello that year led to Fisher’s first peer-reviewed science publication: “It inspired me to delve even deeper into my studies and continue on to graduate school.”

At UMass Dartmouth, Fisher is returning the favor. Recent students of his have continued on to graduate programs in astronomy and astrophysics at University of Toronto, UC Santa Barbara, and UTexas at Austin. Most recently, Fisher has been working with two undergraduate students—senior Jillian Bolinger and rising sophomore —who received stipends from the Office of Undergraduate Research to continue their own research on supernovae.

As Jillian noted, “Dr. Fisher has been a great advisor, maintaining a balance between when to guide me, and when to let me go on my own."

We’re using the power of supercomputing to learn more about how the universe works, what it’s made of, and what its future will be.

We’re using the power of supercomputing to learn more about how the universe works, what it’s made of, and what its future will be.