Christopher Crogan's research, "Mind's Brains and Robots: Towards a Computational Theory of Semantics," focuses on the human mind.

By Web Editor
Posted Tuesday, May 5, 2015
Updated: Thursday, March 31, 2016
SHARE ON FACEBOOKTWEETShare on LinkedInPRINT THIS PAGEEMAIL THIS PAGERSS 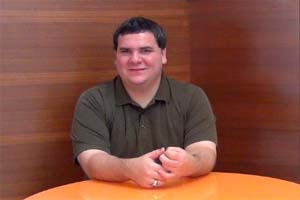 ‌Christopher Crogan ’15 of Wilbraham is combining his computer science major and philosophy minor in his investigation into the human mind, supported by a research stipend from the Office of Undergraduate Research. The title of his project is “Mind’s Brains and Robots: Towards a Computational Theory of Semantics.”

What is your research project about?

The goal of my project is to prove that it’s possible for all functions of the human mind to be expressed in computational terms and, therefore, replicated by a machine. Specifically, I aim to disprove John Searle’s Chinese Room thought experiment, which makes the opposite claim.

Searle argues that the semantics, or meaning, of a thought or mental state cannot be based on syntactic, or computational, processes. In other words, there must be something more going on in our brains than syntactical neuron­firing. The goal of this project is to show that he’s wrong, or at least that he’s not necessarily as right as he claims to be.

My goal is to bring together recent breakthroughs across multiple disciplines in order to shed new light on this debate, and to show that the debate is not over, as Searle would have you believe.

My broader goal is to show that strong AI (artificial intelligence) is possible. However, that is a life­long undertaking, and will certainly not be finished by the end of August.

My senior seminar was the philosophy of the mind, and it’s where I first read John Searle’s Chinese Room Argument. It was clear that his argument was based on several assumptions that have recently been brought into question by work in computer science and neuroscience. My final paper for the class was the first draft for this project.

What has been your experience working with faculty?

Over the past sixteen months, I’ve worked with several different professors on this project, and they’ve been very helpful. Professor Eckert has worked with me over the past eight or nine months, and it was through her guidance that I was able to apply for this grant.

What have you been involved with on campus?

What are your plans following graduation?

I plan on working in the computing industry and eventually going to graduate school. My focus in computing is on artificial intelligence with specific goals in robotics and semantic data processing, both of which are closely tied to my research topic. I intend to continue my research after graduation, whether through continued academic work or in the private sector.

The goal of my project is to prove that it’s possible for all functions of the human mind to be expressed in computational terms and, therefore, replicated by a machine.

The goal of my project is to prove that it’s possible for all functions of the human mind to be expressed in computational terms and, therefore, replicated by a machine.