Prof. Jing Wang earned the MacDowell Fellowship, one of the highest awards in the arts.

‌Prof. Jing Wang is a composer of electroacoustic music and a virtuoso performer of the erhu, a traditional Chinese bowed stringed instrument.

Last summer, as a fellow at the MacDowell Colony in Peterborough, NH, she was able to immerse herself in her creative work. One of the highest awards in the arts, the MacDowell Fellowship acknowledged Wang's reputation as a cutting-edge composer and sonic innovator.

Wang teaches electroacoustic music, composition, and music theory and is director of the Laptop Ensemble, which explores innovative performance techniques.

"I hope that my commitment to creativity in composition helps motivate my students to be committed to their own compositional experience," she said.

"We live in an extraordinary time where technology and globalization are ever-present. I actively encourage students to avail themselves of this contemporary environment, and to use the tools gained by this exposure for applications in their own work.

"I encourage students to seek out multi-cultural activities and learn to appreciate diversity. Composers have been influenced by the music of other cultures throughout the ages, and in today’s globalized environment, gaining exterior knowledge and becoming exposed to diverse ideas has never been easier or more important."

"Viewing the pristine forest from my studio at the MacDowell Colony, I sensed a world forgotten by time," Wang recalled. "There was a natural tranquility, with occasional distractions from scattered birds' song, trees' dancing rhythms stimulated by the breeze, and the contrast of industrial sound created by distant machines.

"I chose the cello to represent tranquility while a duet of the saxophone and accordion represented disturbance. My goal was to explore the dialectical relationship between acoustic and electronic, as well as the convergence and divergence, which are analogous to the tranquility and disturbance of the Colony’s environment."

Wang completed the first version of her new composition at the MacDowell, then shared it with retired UMass Dartmouth design professor Harvey Goldman, a frequent collaborator. Goldman created an animation inspired by Chinese water-ink painting, and the work—titled Passaddhi—was completed in January. 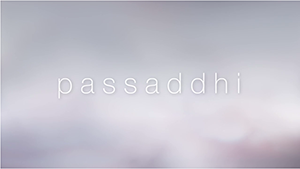 Exploring the "balance of dichotomy"

As a composer, Wang often explores the "balance of dichotomy": East and West, tradition and modernism, acoustic and electronic, order and chaos.

"Blending Western musical sound with Chinese musical instruments and employing Chinese musical elements with Western techniques are recurring concepts in many of my compositions," Wang said.

"I am always fascinated by the mixed colors of the Chinese instruments and their Western counterparts, and have strived to explore the various sonic possibilities. Other Eastern elements I have integrated in my recent works include the inspiration of the Peking Opera in Brahmanda and the use of Indonesian Gamelan in Enigma."

An earlier collaboration with Goldman, Enigma was inspired by the Enigma machine used to encipher and decipher secret messages during World War II. Enigma has been accepted to MuVi4, an international exhibition of video and kinetic works focusing on synesthesia and visual music and will be screened at Teatro Martinez Montañéz, in Jaén, Spain in May. It was also accepted to the international video festival VIDEOMEDEJA held in Novi Sad, Serbia.

Introducing the erhu into contemporary music

Wang has introduced the Chinese erhu into the Western contemporary music scene with her wide array of compositions for chamber ensemble, avant-garde jazz improvisations, and multicultural ensembles. She has performed erhu concertos with several symphony orchestras in the United States, most recently with the Sheboygan Symphony Orchestra.

"I started to play the Chinese erhu at a very early age," she said. "I must confess that I had never been completely enthusiastic about a career as an erhu performer due to its limited repertoire. I was eager to find a path to expand my journey into the musical world."

The turning point emerged, Wang said, when she was accepted to the Beijing Apple Computer Music Center.

"My experience at the Center enabled me to integrate two of my concentrations—classical music and music technology. I also gained a solid foundation in hardware maintenance and software programming at the Center, which greatly benefited my computer music programming."

Today, Wang advises her to students "to absorb and master all the knowledge they're exposed to—because it will become useful and beneficial in their future lives.

"For me, piano, erhu, composition, theory, vocal performance, and technology collectively have reflected my past and also shaped the person I have become as a musician."

I hope that my commitment to creativity in composition helps motivate my students to be committed to their own compositional experience.

I hope that my commitment to creativity in composition helps motivate my students to be committed to their own compositional experience.