From child patient to student nurse

In high school, Veronica Fernandes '18 was diagnosed with rheumatoid arthritis. Combined with an earlier diagnosis of scoliosis, she lived in constant pain.  After a year and a half without improvement, she switched her care to Boston Children's Hospital.

"I had outstanding care and finally found an effective treatment that almost eliminated my pain completely. The doctors and nurses have changed my life for the better and I want to do the same for other children," she said.

That goal led her to UMass Dartmouth, where she has excelled in her academic, leadership, and research activities and plans to become a pediatric or maternity nurse.

Research has been one of Fernandes' strongest achievements in the College of Nursing. She was invited by Assistant Professor of Community Nursing Maryellen Brisbois and University of the Azores Professor Helder Pereira to do research for the Bridging the Atlantic Program. She has developed three abstracts that will be presented at the "Towards Unity for Health: Community Empowerment for Health Conference" in Limerick, Ireland this summer.

Two of those abstracts developed from the Bridging the Atlantic Program, a research and exchange program of undergraduate and graduate nursing students from UMass Dartmouth and the University of the Azores in Ponta Delgada, Portugal. Students and faculty conduct research and provide health education with vulnerable immigrant populations in each country.

The "Bridging the Atlantic: Sister Cities" abstract studies the relationship between the two universities and their ability to identify the strengths and weaknesses of each city and improve health through partnerships in both communities.

A Leininger's model abstract is based on a community nursing theory used by students during the exchange while conducting community health assessments.

A Global Health Collaborative abstract studies the partnerships developed by the UMass Dartmouth student organization and its impact on the local and global communities to improve their health.

"I have learned to love helping the community through health education and screenings." 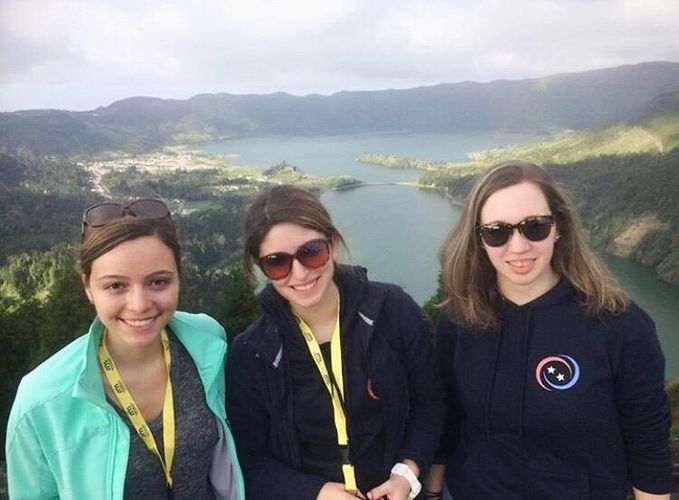 Veronica Fernandes, left, at the Sete Cidades lagoon in Portugal during the Bridging the Atlantic Exchange Program.

Fernandes' work with Bridging the Atlantic began with an exchange program during the spring of 2017. She joined a small group of UMass Dartmouth students who travelled to the Azores during spring break while eight Azorean students visited UMass Dartmouth a week later. They worked with Portuguese elders at the Immigrants Assistance Center in Fall River, MA and in Ponta Delgada. The Leininger Model provided the framework to develop and implement a comprehensive bilingual cross-cultural cancer care project called "Bridging Luso-American Health."

"After working at a health center in the Azores, I learned that the Portuguese healthcare system has a large involvement in the community, focusing on health promotion and preventing illnesses," said Fernandes. "In the United States, we focus our efforts on treating people who are already ill.

"I have also learned that providing culturally competent care, which respects the beliefs and values of diverse cultures, plays a huge factor in providing optimal patient outcomes and patient satisfaction."

One of Fernandes's most memorable nursing experiences was during her pediatric clinical rotation when she was assigned to care for a sick infant going through withdrawals.

"Seeing the inconsolable baby cry and have seizures due to the opioid withdrawals broke my heart. Because of this experience, I knew that caring for these vulnerable infants was my passion. I wanted to be the one who gave these newborns the chance to live a healthy and happy life," Fernandes said.

Based on this experience, Fernandes is determined to become a neonatal intensive care nurse.

She also hopes to volunteer in other countries and become a NICU nurse practitioner. She would like to earn a doctor of nursing practice degree for a future executive role where she can improve hospital policies.

On campus, Fernandes embraced leadership and mentoring roles. She was a member of the National Student Nurses Association and treasurer of the Global Health Collaborative. Consisting of nursing and other majors, the collaborative's goal "is to create a sustainable partnership among students across the university, local community, and global community to improve the health of populations."

One of the group's recent efforts involved renovating a donated ambulance truck that will be used as a mobile health clinic run by UMass Dartmouth students.  Named Care-A-Van, the renovated van will be used to conduct health screenings, health education, referral support, and follow up with vulnerable citizens in local neighborhoods. Students and faculty anticipate several trips to multiple sites each year.

"From this experience, I have learned to love helping the community through health education and screenings," said Fernandes.

She also tutored students at the Science and Engineering Tutoring Center and worked as a certified nursing assistant at St. Luke's Hospital in New Bedford.

"I believe that tutoring students has helped me master my nursing content as well as prepare me well to pass my NCLEX exam. This experience has enabled me to build relationships with other students and faculty in the College of Nursing that I would never have met."

"I have learned to love helping the community through health education and screenings."

Today's nurses must be knowledgeable and analytical, caring and creative. They are key members—and often the leaders—of teams of health care professionals. The College of Nursing & Health Sciences provides the comprehensive education, both theoretical and practical, needed in this challenging and rewarding profession.

Undergraduate nursing applicants are accepted for fall admission only.