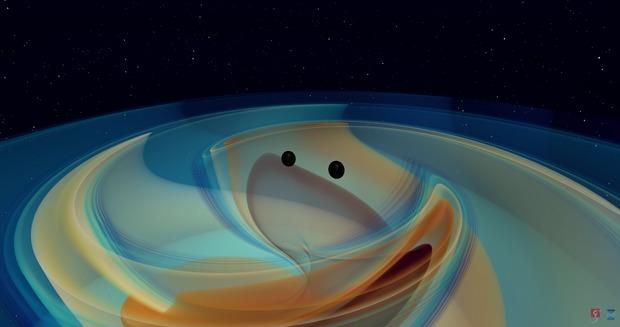 Assistant Professor of Mathematics Scott Field is always listening to the universe and when news broke of the first-ever observed intermediate-mass black hole, he recognized the tune right away.

Since the first gravitational-wave detection in 2015 (which led to a Noble prize), the LIGO Scientific Collaboration (LSC) has observed multiple gravitational wave-signals. However, all of them have been small black holes about 10 to 50 times the mass of our sun. Thanks to the 2020 Noble prize winners, we also know about the existence of supermassive black holes, with mass greater than 100,000 times the mass of the sun. However, it was unknown if black holes in between these two extremes could exist.

Given the unusual masses of the two black holes, the gravitational wave observation posed new challenges for current techniques when trying to extract information from the signal.  “Continuing with the music analogy, suppose we have a recording of an instrument playing a note,” says Field. “We might ask the question of what instrument is it? And what note is playing? We ask similar questions about our recordings of merging black holes. How heavy are they? Where in the sky are they located?”  While not a member of the LSC, specialized mathematical modeling techniques developed by Field and his collaborators helped the LSC answer these questions.

The model provides a detailed look at black holes and is especially well suited for signals produced by very heavy black hole mergers. This modeling methodology is based on recent advances in numerical mathematics including reduced-order modeling and sophisticated approximation methods. Unlike conventional modeling methodology, Field’s modeling approach is more closely related to machine learning, whereby lots of numerical simulation data is used to train these highly accurate models.

“The era of gravitational science is just getting underway,” says Field. “Future gravitational-wave detectors will yield higher quality datasets and place even greater demands on our computational models. It seems like every year there’s a new big discovery made in this field.” While the detection of GW190521 answered a long-standing question of the existence of intermediate-mass black holes, it led to new questions like how did they form in the first place? Future experiments and models will provide the answers

Mathematicians are problem solvers and precise thinkers, applying their knowledge and skills in academia, government, industry, research, and technology.