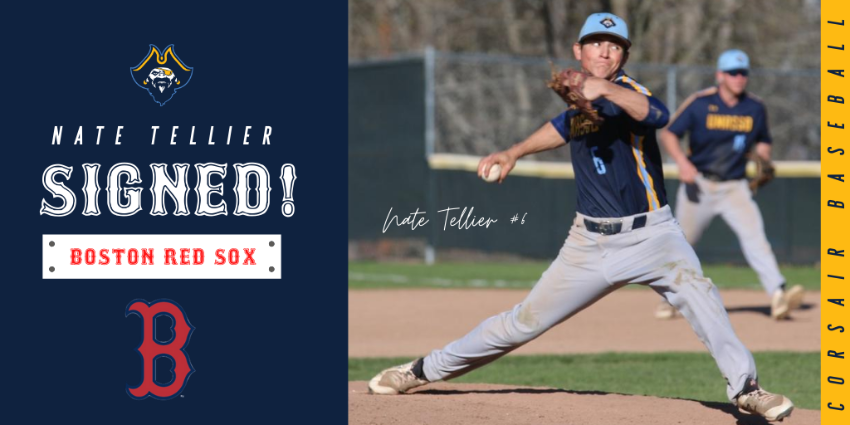 Any kid growing up in New England has the dream of playing baseball for their beloved Olde Towne Team. For former UMass Dartmouth standout Nate Tellier '20, that dream is one step closer to reality after he signed a three-year free agent contract with the Boston Red Sox on Tuesday afternoon.

"To get that call (from Red Sox Northeast Regional scout Ray Fagnant) really was a dream come true," Tellier said. "He asked me 'Do you want to be a Red Sock'?, and it really took me by surprise. The answer was a very quick yes—there's no better feeling in the world."

The Attleboro High product was a two-way threat over the course of his career for Head Coach Bob Prince, as he earned all-Little East Conference and ABCA all-regional accolades as both an outfielder and pitcher. Nate transformed a powerful fastball (registering in the mid-90's) and a devastating slider into the closer's role for the Corsairs over his last two collegiate campaigns, as he recorded eight saves in 15 appearances as a junior in 2019 with a 1.80 earned run average to go with 41 strikeouts (12.72 per nine) in 29 innings pitched.

As dominant as he was on the mound, Tellier was just as powerful at the plate throughout his tenure in a UMass Dartmouth uniform. In 134 games played, he collected 187 hits that included 39 doubles, seven triples, nine homers, 111 runs scored, 65 stolen bases and 91 RBI, as he sported a .342 career batting average to go with a .408 on-base percentage. Nate's individual success paved the way for many team achievements as well, as the Corsairs advanced to the Little East tournament title game both in 2017 and 2019. Nate would have undoubtedly reached the 200-career hit plateau if it wasn't for the COVID-19 pandemic that abruptly halted his senior season, as he rapped out 19 hits in 10 contests in 2020 while helping guide the Corsairs to their best start (9-1) in a quarter century and a spot among teams receiving national ranking consideration by D3baseball.com.

Tellier has certainly sizzled under the summer sun over the last two years playing for a pair of local squads. In 2019, Nate earned a trip to the New England Collegiate Baseball League's all-star game after recording five saves and 34 strikeouts in 15 appearances (16 2/3 innings pitched) for the Martha's Vineyard Sharks and looked to be heading back over to the island before the pandemic. An uncertain spring gave way to competition in July when he joined the Brockton Rox of the Futures Collegiate Baseball League of New England, and along with three saves and 19 strikeouts in 11 1/3 frames, Tellier also picked up a snapping breaking ball to add to his repertoire. The combination of his three pitches caught the eye of the Red Sox as the summer went along.

"Once our spring season was cancelled, my goal was to get signed," Tellier said. "I looked at it as an opportunity to get better, whether I came back to school next spring or if I had other opportunities. There was so much uncertainty created by the pandemic, but the summer season ended up happening and I got the chance to play in some much-needed games.

"You don't get the adrenaline pumping without competition, and we were all fortunate in Brockton to be able to play—no one got sick at all," Tellier continued. "The Red Sox were able to see me because of that chance to play, and it just proves that you never know when that opportunity will come along."

"There was definitely a jump in Nate's fastball this summer, as he was hitting 98 on the gun during his time in Brockton," Prince said. "But the addition of that third pitch is what I think made the biggest difference. With the pop on his fastball combined with both the slider and breaking balls, he really took things to another level. That all came through the same work ethic he's displayed over the course of his career."
To say that 2020 has been a roller coaster for Tellier would be an understatement. He began the year rated as the number four Division III prospect nationally by perfectgame.org, and his final campaign was taking great shape with a hot start both on the mound and at the plate. Nate could have never imagined when he boarded a plane on March 4th with his teammates for UMass Dartmouth's annual spring break trip that in a week's time he would have been walking off a field in Winter Haven, Florida for the final time as a collegian.

But less than six months later, Tellier is ready to begin a journey that will hopefully lead him to walking to the hallowed mound at Fenway Park. And the many steps he has taken along the way will always lead him back to UMass Dartmouth, where he not only shined on the diamond but also excelled in the classroom as a CoSIDA Academic All-District honoree who earned a degree in biology.

With all of the individual success he has enjoyed over the last four seasons, Nate never lost sight of the people who helped make that all possible—his coaches and teammates, and those are the memories he will always have of his days in a Corsair uniform.

"Having the chance to play with so many talented teammates made be a better player, and in turn, helped make our program special," Tellier said. "I credit all of them for helping us turn this program around—we all had something to prove, and we all worked together."

"It was a privilege to see Nate play every day, and I've been fortunate to see all of the hard work and determination he's put in to create this amazing major league opportunity," Prince said. "He is prepared for the next step, and no matter where that takes him, he will be incredibly successful."

The road to "The Show" begins next March for Tellier when he will head to the Red Sox training facility in Florida. Six months from now may seem like a long time, but Nate knows those days will fly by as he prepares for the next chapter.

His dream has come true, but the story isn't over. And there's certainly no better feeling in the world than that.