The materials, which include the Associação Académica flag, the portraits of past club presidents, team photos, opposition team pennants and other ephemera, will be collected and curated at the Ferreira-Mendes Portuguese-American Archives 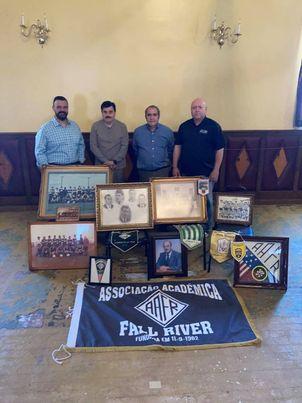 This past week the Ferreira-Mendes Portuguese-American Archives received a donation from the Associação Académica (commonly known as the Academica Club).  The Academica building, located on 627 South Main Street, is being sold and the Association is being dissolved.  The materials, which include the Associação Académica flag, the portraits of past club presidents, team photos, opposition team pennants, and other ephemera, will be collected and curated at the Ferreira-Mendes Portuguese-American Archives.

The clubhouse was built in 1890 and was the site of several associations.  The Associação Académica was founded in 1962 to help Portuguese immigrants arriving in Fall River at the time.  In 2016 a flood destroyed the lower floor of the building along with most of the club’s documents. The walls had to be stripped to studs and the kitchen gutted. The results were that the Academica no longer carried grandfather rights to its structure.  It now had to meet modern building codes.  Unfortunately, the club was unable to raise the necessary funds to pay for its refurbishment resulting in the recent sale of the building.

Dr. Paula Celeste Gomes Noversa, the Faculty Director of the Ferreira-Mendes Portuguese-American Archives stated, “It’s the end of an era.  Growing up in Fall River everyone knew of the Associação Académica.  The soccer games were legendary, especially when they were hosting other teams from Portugal.  It was a great opportunity for Fall River families to go out and see some great athleticism on display.”

Noversa noted, “While the Archives is here to help preserve the history of the Associação Académica, it is unfortunate that so much of it was lost in the flood. I hope that other Portuguese clubs and associations nationwide can learn from this tragedy.  Do not wait until a flood or a fire destroys the history of your club.  Contact the Archives and arrange to donate those papers and materials now.”