On November 16, UMass Law unveiled the newly renovated Arc of Justice Atrium, which was dedicated to Chancellor Emerita Jean MacCormack and the late Margaret “MarDee” Xifaras ’78 and all those who worked to create an excellent, inclusive, and affordable public law school.

As the central gathering place at UMass Law, the Arc of Justice Atrium consists of several art pieces by UMass Dartmouth MFA graduates in addition to three pieces completed by Mattapoisett artist and UMass Dartmouth alum John Magnan ‘99. After interviewing many members of the UMass Law community, Magnan created the art installations to inspire and convey a call to action by all those who pass through the space.

The artwork and complete renovation of the atrium were made possible through the generosity of Chancellor Emerita Jean MacCormack. MacCormack led UMass Dartmouth during the establishment of UMass Law and was a champion for the school as the Massachusetts Board of Higher Education voted to approve the merger with Southern New England School of Law (SNESL) in 2010.

“John Magnan's Arc of Justice Installation captures so well the vision so many of us had in working to establish an excellent, inclusive, affordable public law school at UMass. I am so proud of all that the Law School has accomplished and honored that this remarkable space is dedicated to my good friend MarDee Xifaras and myself and all our partners,” said UMass Dartmouth Chancellor Emerita Jean F. MacCormack. “I hope it inspires all the students, faculty, and staff at UMass Law, and everyone who enters the space to be leaders in Pursuing Justice.” 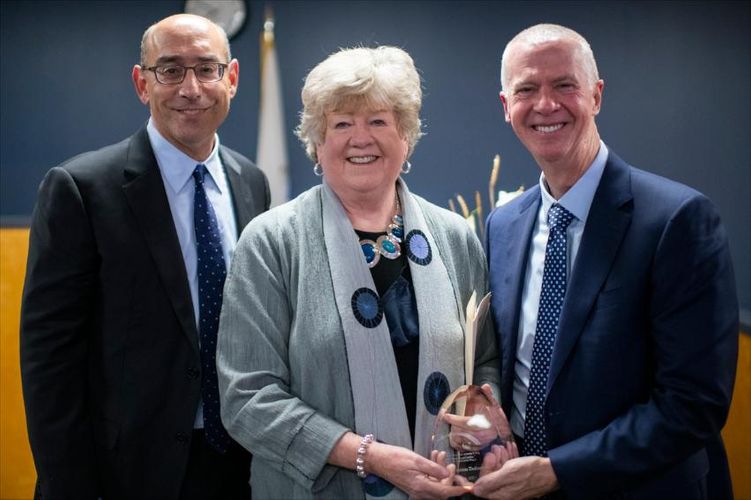 “It said everything about the character of Jean MacCormack and MarDee Xifaras that both believed so strongly in the idea that Massachusetts, where our democracy began, needed and deserved a public law school like nearly every other state in the country,” said UMass President Marty Meehan. “I was fortunate to have Jean as a colleague and it was always so clear how deeply she cared about helping students succeed, especially students who came from lesser means. As a trustee, MarDee was a mentor to our student trustees, a voice in support of student interests, and a fierce fighter for UMass, and for this region.”

"Through Jean and MarDee’s tenacious vision for what UMass Law could become, this law school found its home at the University of Massachusetts Dartmouth and has realized its potential. This atrium and its art installations now truly reflect the excellence of UMass Law. I know that it will inspire our students, faculty and staff for generations to come,” said UMass Dartmouth Chancellor Mark A. Fuller.

“Without MarDee Xifaras's passionate and tireless efforts, there would not have been a Southern New England Law School to become UMass Law. And without Jean MacCormack's powerful and compelling vision, we would not have become the first public law school in the over 240-year history of the Commonwealth,” said UMass Law Dean Eric Mitnick. “UMass Law, always, will continue to be inspired by their partnership and strive to fulfill the commitment they shared to improving people's lives and expanding access to justice." 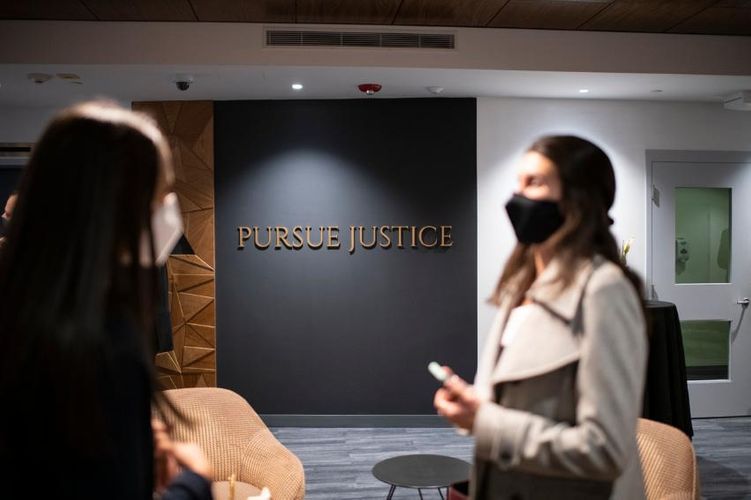 Throughout the evening, the success of UMass Law was on full display. Over the past five years, UMass Law ranks second in the nation, among nearly 200 ABA-accredited law schools, for enrollment growth. In fall 2021, UMass Law welcomed an incoming class that was 33% students of color and boasted the highest LSAT score and GPAs in institutional history. Coupled with a record number of applications, UMass Law continues its upward trajectory of academic quality. UMass Law has twice been ranked among the best law schools in the country for its program of practical training and ranks second among all fifteen law schools in New England for the percentage of students entering public service.

The night celebrated the late MarDee Xifaras, a New Bedford lawyer and community activist, who served on the UMass Board of Trustees and was a fierce advocate for the establishment of UMass Law. Xifaras’ 2019 obituary listed the “establishment of the UMass Law School in Dartmouth as her greatest public accomplishment.”

“The Xifaras family is honored that the atrium at UMass Law is being dedicated to my mother and Jean MacCormack for their and other’s commitment to an accessible, affordable, public law school. They, like UMass Law, share a commitment to justice, inclusivity and community service,” said Dena Xifaras, daughter of MarDee Xifaras.

“The UMass Law school would quite literally not have been possible without the significant efforts of Chancellor Emerita MacCormack and MarDee Xifaras,” said State Senator Michael J. Rodrigues (D-Westport), Chair of the Senate Committee on Ways and Means. “As an alumnus of the former Southeastern Massachusetts University, I am thrilled that the state’s first public law school continues to be an institution that the entire SouthCoast can be proud of. Once again, thank you to Chancellor Emerita MacCormack and MarDee Xifaras for their vital contributions to UMass Dartmouth.”

“This institution is a beacon of justice and continues to exceed all expectations in providing access to a world-class legal education,” said State Senator Mark Montigny (D-New Bedford). “It is only fitting that the school’s lobby and gathering center is dedicated in honor of two women who worked diligently with us to ensure this campus could thrive.”

“As a graduate of Southern New England School of Law, I never could have imagined it being part of the University of Massachusetts system. The efforts of these two incredibly strong-willed women made it happen. This dedication will remind every student who attends UMass Law how we got there,” said State Representative Chris Markey (D-Dartmouth).

“The art installations remind us that justice doesn’t come to us uninvited but must be pursued. To secure equal human rights for everyone, we must forever work for inclusion, equitable treatment, and legal access for all,” said John Magnan, who also credited his creative partner, artist Annie Jonas, for her contributions to the project.