Lauren Roche '15: A passion for art and politics 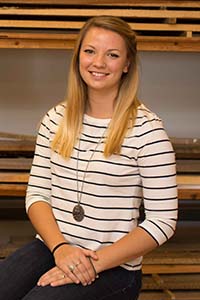 Lauren Roche '15 of Norfolk has packed a lot of "invaluable experiences" into her time at UMass Dartmouth. A dual major in political science and sculpture, Lauren is also a four-year letter athlete in track and field and completed a summer internship with Suffolk County District Attorney Dan Conley's community relations unit.

Following graduation, Lauren plans to continue working as a paralegal at Boston law firm Mullen and McGourty while preparing to apply to law school.

A passion for art and politics

Of her interesting combination of majors, Lauren said that she's always had a passion for art—but grew to be passionate about politics as well.

"I've been making paintings, little sculptures, and drawing since I can remember," she said. "Politics became a passion of mine over time. I would watch TV with my parents at night, and I was always so perplexed by the news and the way things were going in the world. In fifth grade, I dreamed of being the first woman president. Since then my goals for my political career have zoned into a smaller target area, but you never know what could happen!"

For Lauren, there is a definite connection between her two disciplines.

"In my sculptures, the relationship between the objects I create and the room itself is what's most important. My sculptures are suspensions: I hang small blocks and other hand-made shapes to create frozen moments in time. I tend to focus on the impact that many small objects have on the larger space they occupy.

"In some ways, my focus is the same in political science. I'm extremely interested in learning and studying how political structures persuade people to vote the way they do. The changes in public interest and the factors that influence people is what's most fascinating to me.

"My internship with DA Conley and his community relations staff was one of the best experiences of my life," Lauren said.

"I was able to see first-hand the many parts of the office of the District Attorney and court system in Boston. I shadowed victim witness advocates, Assistant District Attorneys, and probation officers; toured the Nashua Street Jail; met police officers who work closely with the DAs; and spoke with judges.

"After this internship, I am certain that a career as a prosecutor is something I want to pursue.

Realizing her potential as an athlete

Lauren credits much of her academic success to being a track and field athlete. Unfortunately, she developed anterior compartment syndrome, an extremely painful condition of the lower leg, which changed the way she was able to work out—but that did not prohibit her from continuing to compete as a Corsair.

"I became very close with the athletic training staff and, without them, I don't think I would have accomplished my goal of being a four-year letter winner," she said.

"While my coaches were extremely cooperative with my training schedule, it was really the trainers who became my biggest coaches, cheerleaders, and support system. My attitude toward my sport and my desire to reach my athletic goals was revitalized by the athletic training staff. I cannot put into words how much that helped me as an athlete and further translated into my life as a student. The staff sees the potential in every athlete and helps each athlete realize his or her own potential."

Although busy with her final projects, Lauren took the time to write to Chancellor Divina Grossman about the positive changes she's noticed at UMass Dartmouth.

"I've seen a lot of changes since my first year here at school, and I can say with confidence that I believe UMass Dartmouth is becoming one of the more competitive schools," Lauren wrote.

"We are operating at a higher level of learning and most importantly teaching students to always strive for success and future success. I can say that I have made many very ambitious friends who would not be what they are today without their experience here at UMass Dartmouth."

I’ve seen a lot of changes since my first year here at school, and I can say with confidence that I believe UMass Dartmouth is becoming one of the more competitive schools.

I’ve seen a lot of changes since my first year here at school, and I can say with confidence that I believe UMass Dartmouth is becoming one of the more competitive schools.