Tracking evidence of a changing climate

By Sherri Miles with Eileen Marum '16

In offices and labs across UMass Dartmouth, on board a research vessel in Buzzards Bay, and at field sites near and far, scientists, engineers, policy analysts, and alumni are responding to the impact of climate change on water systems—warming seas, changing fisheries, retreating shorelines, vulnerable salt marshes, and fresh water supplies.

Monitoring the health of Buzzards Bay

The world's oceans are warmer now than at any point in the last 50 years, according to the Environmental Protection Agency. Scientists at UMass Dartmouth's School for Marine Science and Technology (SMAST) have been sampling local waters for nearly three decades and have found evidence of warmer waters in our own backyard.

"We have been monitoring Buzzards Bay on a monthly basis since October of 1987," said Jefferson Turner, Chancellor Professor jointly in the Biology Department and in Fisheries Oceanography at SMAST. From the University's research vessel, R/V Lucky Lady, researchers collect samples at eight stations throughout the bay to establish monthly and yearly patterns in salinity, water chemistry, phytoplankton plants, zooplankton communities, and temperature.

"We have seen a significant increase in May surface water temperatures over the last 28 years," said SMAST Research Technician Christian Petitpas BS '02, MS '11, PhD '15. "This significant warming trend occurs at a time of year when we are transitioning from winter/spring to summer conditions—generally the average increase in temperature from April to May is around 5°C (9°F), but we can see jumps as much as 12°C (21.6°F)."

"What the effects of this are going to be on the biology is not clear," said Turner.

Scientists do know that changes in water temperature can alter ecosystems. Species expand or contract their ranges as a result, or go extinct. "We've observed changes in the local plankton community that suggest there are potential impacts from warmer water," said Petitpas.

Cyanobacteria are a natural part of the ecosystem, but also considered emerging contaminants that require more research in Massachusetts in order to evaluate potential risk to public health. 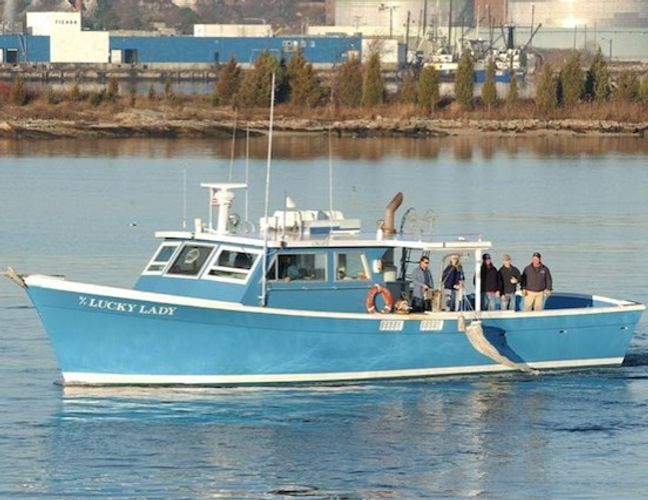 Professor and Chair of the SMAST Department of Fisheries Oceanography Kevin Stokesbury is tracking shellfish on Georges Banks. "The first sign of climate change and ocean acidification is going to be changes in distribution. The primary reaction of animals to adverse conditions is movement."

Using a video survey system developed for the local scallop industry, Stokesbury takes samples from the sea floor, then works with graduate students to count and identify the species in every image. "We want to know the abundance, density, size distribution, natural mortality, and the impacts of fishing."

"With this kind of work, you're not going to be able to tell climate change right away. But we have absolute measures of animals per meter squared, associated with a latitude and longitude and temperature. Twenty years from now, someone can go back to the exact same spot and say, in 2004 this species was here, and now there isn't any of it," said Stokesbury.

Stokesbury also tests scallops for signs of ocean acidification, which is worsening due to increased carbon dioxide in the water as the oceans absorb greenhouse gases trapped in the atmosphere. When combined with water, carbon dioxide forms carbonic acid.

"Our two most valuable fisheries on the eastern seaboard are the Atlantic sea scallop and the American lobster," said Stokesbury. "They need calcium to build their shells for protection and growth. They have to undergo calcification, which is affected by carbonic acid—the animal has to use more energy to produce the shell." This extra energy reduces the energy available for the animal to grow or reproduce. Ocean acidification has a real impact on marine animals, including extinction.

Living on the coast and planning for the worst

Current international scientific reports estimate sea levels will rise 1-4 feet by the end of the century. Internationally, low-lying island nations such as the Marshall Islands in the Pacific Ocean are already disappearing, and on the U.S. coasts, shorelines are changing by the year.

If residents do not retreat from the coastal zone, they will lose their property to the sea. Land-use planning in coastal areas is a first step toward mitigation and within the authority of local governments. McGuire recommends identifying and mapping coastal erosion hazard areas and adopting regulations to control certain activities and development in those areas.

UMass Dartmouth alumnus Carl Andreassen '76, a principal hydraulic engineer and certified floodplain manager employed by Somerset County, NJ, agrees that we must retreat from floodplains and at-risk coastal zones to reduce loss of life and property damage resulting from floods, coastal storms, and the effects of climate change. In order to provide sound  floodplain management, "We need to change our thinking, and move infrastructure out of flood plains," Andreassen said. He encourages a proactive approach, which includes building resilience as well as relocating at-risk infrastructure. Without such efforts, we can expect to see an increase in both the severity and frequency of flood damages.

That sea level change also is affecting our wetlands. "Wetlands are our local equivalent of coral reefs," said Brian Howes, professor of Estuarine and Ocean Sciences at SMAST. Howes is particularly interested in the survival and persistence of wetlands as sea levels rise.

Salt marshes are dynamic systems that flood twice a day. They keep up with sea level rise by depositing inorganic and organic matter and growing vertically so they don't drown. However, the ability to grow vertically is finite, said Howes. And they are threatened by an accelerated rate of sea level rise.

"If the sea level rises too fast, then the plants will eventually be underwater too long and they literally drown, and then you lose your marsh," said Howes. "That's a problem because it affects so many aspects of the coastal system. We get more than a trillion dollars of free ecological services from these systems in the United States."

All is not lost, however, if marshes can retreat inland. This too has land-use planning implications, but also occurs naturally. Howes gives a regional example: "When you see marsh plants growing around dead trees, they weren't there when the trees were happy and growing. Marsh plants are there now because sea level has risen. Sea level has been rising for 18,000 years and it's rising now. The only argument that we're having is how fast will it rise."

Fresh water is "is expected to become increasingly scarce in the future," said Sukalyan Sengupta, professor of Civil & Environmental Engineering at UMass Dartmouth. "As surface water sources become contaminated by microbes and agricultural/industrial effluents, there is greater push to access groundwater."

Inorganic compounds occurring naturally can contaminate groundwater as well and become a serious issue for humans who drink it. Sengupta is developing innovative technology that removes naturally occurring arsenic and harmful levels of fluoride from groundwater. The process employs a special filtration system that meets the demand for potable and irrigation water. Countries most affected by arsenic contaminated groundwater include India, Bangladesh, Nepal, and Southeastern Asia.

Arsenic is not the only threat to water quality. Cyanobacteria, a type of microscopic photosynthetic bacteria that inhabit freshwater, coastal, and marine water, have the potential for toxicity and environmental problems, according to Pia Moisander, assistant professor of Biology at UMass Dartmouth. "If conditions are suitable, cyanobacteria can increase to excessive levels and form visible 'blooms' that can adversely affect water quality."

Cyanobacteria could potentially disrupt drinking water supplies and water-dependent industries, and pose a risk to livestock, wildlife, and human health.

Cyanobacteria are a natural part of the ecosystem, but also considered emerging contaminants that require more research in Massachusetts in order to evaluate potential risk to public health.