On Friday, May 31, UMass Dartmouth hosted Nobel Prize winner Rainer Weiss. Weiss was awarded the Nobel Prize in Physics in 2017 alongside Kip Thorne and Barry Barish for their work on the observation and detection of gravitational waves from black holes. The event, sponsored by the College of Engineering and the College of Arts & Sciences offered an opportunity for the SouthCoast community to meet and ask questions with a Nobel Prize winner.

The event, held in the Main Auditorium, kicked off the 22nd Eastern Gravity Meeting. The regional meet-up is open to researchers of all levels, from undergraduate students to faculty in all areas of gravitational physics, including classical, quantum, theory, observation, and computation. The kick-off event featuring Weiss attracted more than 250 members of the astrophysicist and general community. 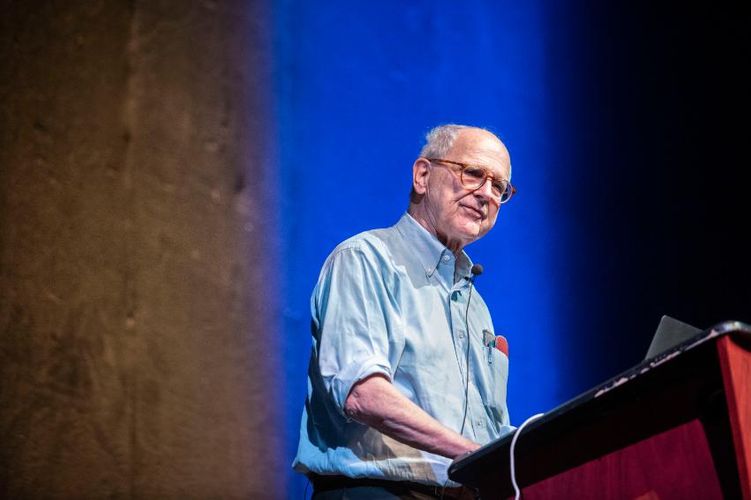 Weiss began his talk with a brief history of some relevant scientific theories by Isaac Newton and Albert Einstein, explaining how humanity uses scientific progress to build upon itself. Weiss then shifted into his area of expertise: gravitational waves. These invisible, but impactful forces were a major component in Albert Einstein’s general theory of relativity but remained unseen until Weiss and his team’s 2015 discovery. Using various techniques with lasers as part of the Laser Interferometer Gravitational-Wave Observatory (LIGO), Weiss and his team were able to see the effect of gravitational waves in real-time.

In attendance was Engineering Professor Gaurav Khanna (Physics), who made news in 2018 for demonstrating the existence of extreme black holes that were thought to be theoretical and unobservable alongside his research partner Lior Burko of Georgia Gwinnett College. Khanna and Burko’s research upended conventional wisdom on extreme black holes, which presumed these objects were unstable, and thus did not exist in nature. Through computational research, Khanna and Burko found that extreme black holes are stable and may someday be observed by gravitational-wave observatories.

In fall 2018, the College of Engineering and the Society of Women Engineers hosted Janeen Romie (’83), detector engineering group lead at LIGO in Livingston, La. She was the run manager for the first direct detection of gravitational waves from colliding black holes.

Weiss closed with a question and answer session and a hope that future scientists, even some at UMass Dartmouth, will carry on humanity’s work in solving the mysteries of the universe.