Carlos Colon's research with the UMass Drone project led to internships with the International Center for Terrorism Studies and the National Consortium for the Study of Terrorism.

By Web Editor
Posted Tuesday, May 5, 2015
Updated: Thursday, March 31, 2016
Share on FacebookTWEETShare on LinkedInPRINT THIS PAGEEMAIL THIS PAGERSS 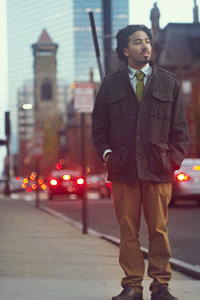 ‌Carlos Rafael Colon '15 of Boston was a sophomore majoring in psychology when he discovered a research focus that led him to a second major, an internship in the Washington, D.C. area, and a future career path.

Carlos first learned about the UMass Drone project when he took a political science class with Prof. Avery Plaw as an elective. Founded by Plaw, Prof. Brian Glyn Williams, and research analyst Matthew Fricker, UMass Drone—now known as the Center for the Study of Targeted Killing—tracks the casualties inflicted by U.S. drone strikes in Pakistan, Yemen, and Somalia and targeted killing by other states elsewhere in the world.

Carlos joined the project after receiving a research grant from the Honors Program.

"If I hadn't stopped by Prof. Plaw's office to show him something I found online that related to drones in Pakistan, he wouldn't have asked me if I'd like to help," he said. "I happened to be in the right place at the right time."

By analyzing media reports from Pakistani and global newspapers, the UMass Drone team had assembled a database of casualties, initially focusing on Pakistan. Carlos's first objective was to help update and expand the database; his second was to create a website for the project, to make the data available to the public.

"Updating the data involved helping the team with reviewing each strike in the database, increasing the number of sources on which we are drawing data, and providing an explicit reason in each case for the data source that we identify as the most credible," he said.

The UMass Drone project has since evolved into the Center for the Study of Targeted Killing, and Carlos is credited as one of its co-founders.

"The UMass Drone project gave me a research focus and an idea of what I'd like to do going forward," Carlos said.

He decided to declare a double major in political science and psychology. Working with the Career Development Center, he also applied to the Washington Center to serve as a research intern at the International Center for Terrorism Studies at the Potomac Institute for Policy Studies in Arlington, VA.

"I conducted extensive research on Middle Eastern affairs and assisted with analytical writing, editing, and compiling research materials for the director," Carlos said, noting that the experience complemented his work with UMass Drone.

"The internship increased my employability by introducing me to other opportunities. Through the International Center for Terrorism Studies, for example, I was introduced to The Jerusalem Review of Near East Affairs where I've written articles about Middle Eastern politics," he said.

Internship: National Consortium for the Study of Terrorism

Carlos has also interned at the National Consortium for the Study of Terrorism and Responses to Terrorism in College Park, Maryland.

"I analyzed transcripts of terrorist propaganda videos produced by Al Qaeda and Al Qaeda affiliate groups. I looked at a variety of things such as the message of the video transcripts, the target audience, and the type of persuasive attempt used—rational or emotional," he said.

"Every opportunity builds on an earlier experience. My experience with UMass Drone helped me gain my first internship. I'm also co-authoring a book with Dr. Plaw and Matthew Fricker on the drone debate. We're sending it for peer-review, and it's on track to be published by this fall."

Carlos and Dr. Plaw have also written "Correcting the Record: Civilians, Proportionality and Jus ad Vim," a chapter from the upcoming book The Legitimacy of Drones: UCAVs for Cross-Border Counterterrorism, set to release this summer.

The future: Graduate school and a career in research

The more experience you gain, the more likely it is that you'll increase your chances out in the real world.

Carlos plans to spend the year after graduation better positioning himself for graduate school by finishing his research projects and working on publications. He would also like to improve the Center for the Study of Targeted Killing website by upgrading the current dataset, incorporating new data, and releasing the new web design.

He envisions a career at a research-based institution following graduate study. Carlos plans to apply to the Political Theory department at Oxford and Georgetown’s Security Studies Program.

The UMass Drone project gave me a research focus and an idea of what I'd like to do going forward. It had a big impact on my studies.

The UMass Drone project gave me a research focus and an idea of what I'd like to do going forward. It had a big impact on my studies.