Ana honed her research skills through participation in Model United Nations events on campus and in New York City. 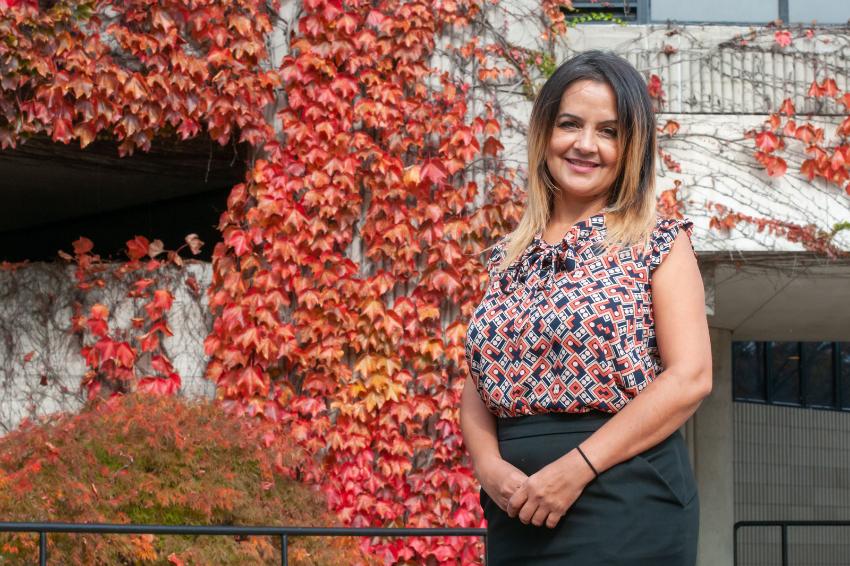 Favorite place: the LARTS wall near the Campus Center. “When the leaves change color in the fall, they highlight our campus architecture."

For Ana Da Paixao '20, the opportunity to participate in the Model United Nations in New York City reinforced the knowledge and skills she has acquired as a student at UMass Dartmouth.

"Through Model UN, students are exposed to differing viewpoints, experience the challenges of negotiation, see the rewards of cooperation, broaden our worldviews, discover the human side of international relations and, best of all, build skills in diplomacy," she said.

More than 5,000 university students, more than half from outside the U.S., met at the National Model United Nations (NMUN) this spring to discuss current global issues in a real-world context. The conference featured interactions with Secretariat members and sessions held at UN Headquarters.

Ana first became involved in the Model UN through a class at UMassD.

"When I heard that the Model UN Club was recruiting delegates, I immediately knew it was for me," she recalled. "Through the Model UN class, I learned how to conduct research and prepare a Model UN research binder. I represented Kuwait as a delegate and diplomat for the fall 2018 Model UN class held on campus. As part of my research, I conducted a telephone interview with one of the diplomats at the Kuwaiti Embassy in Washington, D.C."

I have had the opportunity to study at a great university and with great professors. 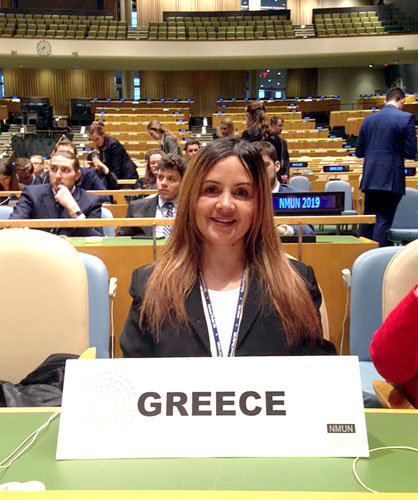 Ana Da Paixao represented Greece as a delegate and diplomat at the National Model United Nations in New York as part of the UMassD team.

In the spring, Ana and other UMassD students represented Greece, UNICEF, and other UN organizations at the NMUN. UMassD was named an Honorable Mention Delegation at the event.

"We had to understand and write position papers on contemporary international issues," she said. "If we had new ideas, we could introduce resolutions to our position paper. I had three resolutions for the two topics I covered. I walked the extra mile and read all the position papers for Greece and UNICEF, and I knew I would have a chance to pass my resolutions. As a result, two of them are on the UNICEF 24-28 March 2019 final PDF."

Ana’s takeaways from her experience include the importance of research and teamwork—as well as individual responsibility.

"If you work by yourself, you work harder. I learned that when you have passion for something, you fight for it, and that’s what I did. I wanted to solve the problem of refugees arriving in Greece," she said.

"Representing Greece as a UMassD delegate and diplomat was a great experience. I had the opportunity to walk through the United Nations' grounds in New York, where kings and queens, presidents, and other authorities have met in the past, and still meet, to discuss international issues and find common ground."

As a liberal arts major, Ana has two concentrations, in political science and sociology. She also has a minor in Portuguese.

"I chose liberal arts to learn about diverse subjects," she said. "The different fields of political science, sociology, and Portuguese give me an open range of knowledge. I have had the opportunity to study at a great university and with great professors."

A native of Brazil, Ana has persisted in her education despite a language barrier, financial issues, and personal challenges.

"Many times, I faced desperation and oppression, and not everybody wanted me to excel," she said. "However, the only thing that kept me persevering in life has been my education. Education became my salvation."

"I was invited to attend College Now’s Share the Dream Banquet, and there I heard one of the speakers say that nobody believed he could make it; he felt oppressed, but he learned to face oppression with intelligence. That's when I realized why education has been working for me. Education is the way to shape my intelligence, as a way to face oppression."

To gain professional experience, Ana volunteers at Blithewold Mansion, the Preservation Society of Newport, and at Newport Hospital. Fueled by her studies and her experiences, her goal is to work in government at the federal level or possibly at the UN itself.

I have had the opportunity to study at a great university and with great professors.

UMass Dartmouth's liberal arts major offers an intellectual challenge, encouraging you to pursue your interests across a variety of academic fields.

Corissa Amaral '23 perseveres in her nursing studies despite losing three family members to Covid-19James Cunniff '66: Learning the value of being a good communicatorRole models encourage nursing students of color to believe that “they can make it”UMass Law honored for highest participation in 2020 Walk to the Hill event that raises funds for civil legal aidUMass Dartmouth nursing students join local Covid-19 vaccination efforts
bg